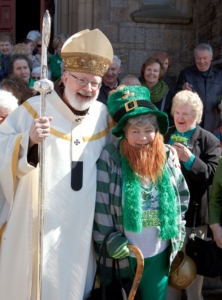 SOUTH END -- Irish and non-Irish alike turned out in force for a Mass in honor of the archdiocese's patron saint.

About 1,000 people, many donning green garb or Irish sweaters, attended the noontime St. Patrick's Day Mass at the Cathedral of the Holy Cross, with Cardinal Seán P. O'Malley as the main celebrant and homilist.

From its opening, the bilingual Mass very much had an Irish flavor. Traditional Irish airs were played on a harp as preludes and a pipe and drum band began the opening procession with a playing of "The Minstrel Boy."

Opening hymns for the Mass included the Gaelic hymn "Dochas linn Naomh Padraig," and "All Praise to St. Patrick" in English. The offertory hymn was "Breastplate of St. Patrick" and "Our Lady of Knock" was the Communion meditation.

Readings were proclaimed in Gaelic and English.

Cardinal O'Malley's homily reflected on the life of St. Patrick, discussing his contributions to Catholic evangelization and how he can serve as an example to modern-day Catholics.

St. Patrick was born in Britain and sold into slavery in Ireland. He returned home in his early 20s but went back to Ireland and converted a large portion of the native people there to Catholicism. His life spanned the fourth and fifth centuries, though exact dates are debated.

Cardinal O'Malley praised St. Patrick for affirming God's will and said how he forgave his enemies.

He also discussed St. Patrick's contributions as an evangelizer.

"Thanks to St. Patrick, the Gospel brought a culture of life to a world of violence and fear," Cardinal O'Malley said.

"He is our patron because he was a great apostle, a missionary," Cardinal O'Malley said. "All of us must be missionaries right here in Boston inviting our brothers and sisters to a life of discipleship."

Also during the Mass, Cardinal O'Malley blessed shamrocks, which were given to attendees after the liturgy.

"It's beautiful," said Bonnie Tebbetts, a parishioner at St. Mary Parish in Foxboro who attended the Mass for the first time this year.

"St. Patrick was so strong," Tebbetts added. "He endured a lot."

Tebbetts, who noted that her maiden name is Harrington, said she and her sister came to the Mass in honor of her "very Irish father who passed away last June."

But it wasn't just those with Irish connections who enjoyed the Mass.

Bill Auriemma, a parishioner at Holy Rosary Parish in Lawrence, said, "I'm an American and I celebrate St. Patrick's Day. That's what we always do."

Auriemma has attended the St. Patrick's Day Mass at the cathedral for over 10 years. For the last four, he has taken a shamrock blessed by Cardinal O'Malley to the gravesite of his friend's daughter, who passed away four years ago.

"It's a memento for her just to keep her memory alive," he said.