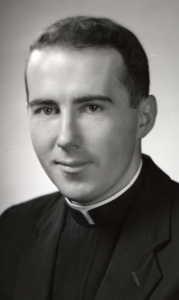 If someone in Peru said "no you can't" Father John "Jerry" Pashby just did it anyway. Inevitably it was a request to this or that official for a new road, for electrical service, for building supplies for farming equipment that met with the "No" and which in good time Father Pashby got done.

A native of Everett where he was born on Jan. 11, 1934 he was son of the late Francis and Clara (Collins) Pashby; he was raised in neighboring Revere. After high school he entered the archdiocesan seminaries first at Cardinal O'Connell in Jamaica Plain and then at St. John's, Brighton. Richard Cardinal Cushing ordained him to the priesthood at Holy Cross Cathedral on Feb. 2, 1960. His first and only assignment within the territory of the archdiocese was as an assistant at St. Catherine of Siena Parish, Charlestown where he went immediately following ordination and remained for three years.

In February 1963 he became one of the early members of the relatively new Missionary Society of St. James the Apostle and was assigned to Peru. Following language studies he went to missionary outposts in the country, going away to Bolivia for only a brief stint there.

His work in the country among the poor of Peru is the stuff of legend. He was also popular among the other priest members of the society, directing the language school in Peru and helping prepare newly arrived members for their mission work. His heart was always with the people and getting things done that no one thought or said could be.

The assignment cards of most priests of the archdiocese usually have at least six lines of assignments, some more, very few less. Father Pashby's fills two lines: Charlestown and Society of St. James. One note was added in March 2009 when he "retired" but remained in South America and a final one, the date of his death, March 18, 2011.

Father Pashby had returned home for medical treatment and when he was finished, and more than eager and ready to return to Peru he made preparations; on the morning of his intended departure he suffered a major stroke at the St. James headquarters and was rushed immediately to Mass General Hospital where he died.

At his request, Father Pashby, following cremation, will be buried in Santo Tomas, Peru.