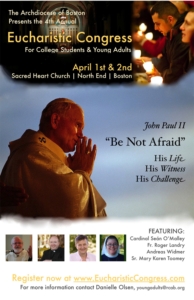 There are no delegates, lobbyists, or votes taken during the 4th Annual Eucharistic Congress for College Students and Young Adults held on April 1 and 2 in Boston's North End.

Instead leadership committee member, Liz Ward described it this way: "A weekend centered around the beauty of Christ in the Eucharist."

Ward was part of the original leadership team of area young adults that helped bring to life a vision held by the vocations director of the archdiocese Father Daniel Hennessey, with assistance from Fathers Michael Harrington, Matt Williams, and Richard Clancy. The weekend has since become one of the crown jewel events for college student and young adult outreach for the Archdiocese of Boston.

It consists of talks from Catholic speakers, service projects, opportunities for silent and guided prayer, access to the sacrament of confession, and Mass with Cardinal Seán P. O'Malley followed by an Italian dinner.

The weekend's pinnacle is a procession with the Blessed Sacrament on Saturday evening, winding through the streets of what is arguably Boston's most traversed neighborhood.

Years back, Father Hennessey had read about a practice of Blessed Pier Giorgio Frassati, a young adult Italian national who lived in the early 20th century and who was called "The Man of the Beatitudes" by Pope John Paul II. Blessed Pier Giorgio would sometimes attend Saturday morning Mass and then bring gifts to the poor and needy. The gifts were carefully wrapped to preserve the dignity of the recipients. One Saturday morning a group of his friends wanted him to go hiking and pressed Frassati about his charitable practice when he declined.

"When I go to receive the Eucharist, Christ enters into my home, and then when I go do acts of charity, Christ allows me to enter into his home, the home of the poor," said Father Hennessy recalling the words of Blessed Pier Giorgio.

This episode stuck with Father Hennessy and he had the idea of bringing a Eucharistic Congress to Boston. Soon, he had the collaboration of Father Michael Harrington who was working with him in the vocations office, and of Father Matt Williams in the Office of New Evangelization of Youth and Young Adults.

Father Harrington had recently been in the North End on a warm pleasant evening with the area teeming with people when he was struck with an idea. "I remember thinking, 'We got to be down here on these nights. Look at it, this is Piazza Navona for Boston, this is the place where people gather,'" said Father Harrington, referring to a popular Catholic ministry in Rome that invites people off a busy square into a church for eucharistic adoration.

The priests recruited Catholic young adult and college student leaders to a meeting in November of 2007 to present the idea. After an hour of prayer in front of the Blessed Sacrament, Father Hennessey asked the leaders about their thoughts and if they would participate as leaders.

"One after the other of them they all said 'yes definitely,' they'd be very happy to" recalled Father Hennessy.

The initial event drew between 300-400 people and both Father Hennessy and Ward were struck by the number of young people who went to confession on the Friday night and the number of priests there to hear them.

The success of the first Eucharistic Congress led to monthly "Jesus in the North End" nights of prayer, confession, Mass, followed by socials. The events were held at St. Leonard's, one of the North End parishes that has supported the congresses.

This year's congress has taken the messages of John Paul II as its theme, and the second day of the weekend falls on the 6th anniversary of his death. With his upcoming beatification on May 1, areas of his life, witness, and challenge to young Catholics will be explored.

One of the featured speakers will be Sister Mary Karen Toomey from the Sisters of Life. Her talk will address John Paul II's culture of life ethos focusing on the centrality of Jesus.

"One of the things that I love about John Paul II is he helped us see that if you have Jesus, if you have faith, that doesn't mean that you are out of the margins," said Sister Toomey.

"That means you are living life fully, you're having a great time. You know, it's not exclusive, you don't have to wear a hair shirt everyday. You can be a normal person and love God."

"I always prepare to speak to young people as if I were speaking to future popes, future Mother Teresas, future great saints who will light the world on fire," he said.

"For me as a priest that thoroughly exhilarates me and makes me even more passionate to deliver what Pope John Paul II has already given me and inspired me to pick up when I was a young adult," Father Landry said.