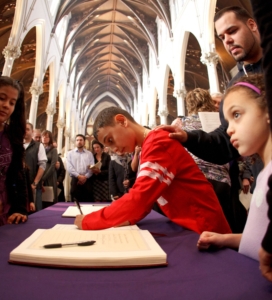 Juan Pablo Rodriguez, 10, of Immaculate Conception Parish in Revere signs the Book of the Elect during the Rite of Election March 13 at the Cathedral of the Holy Cross. Nearly 600 catechumens -- those not baptized -- and candidates -- baptized Christians who are not Catholic -- took part in the The Rite of Election for catechumens and Call to Continuing Conversion for candidates at the Cathedral of the Holy Cross March 13, the First Sunday of Lent. The catechumens and candidates will be received into the Church at the Easter Vigil. Pilot photo/ Gregory L. Tracy

SOUTH END -- For catechumens like Kelly Elpers, the Rite of Election is an exciting and moving final step on what can be a long journey.

"I've been looking forward to today for so long," Elpers said.

On March 13, the first Sunday of Lent, about 600 catechumens and candidates took part in the Archdiocese of Boston's Rite of Election at the Cathedral of the Holy Cross, with Cardinal Seán P. O'Malley as the main celebrant and homilist.

During the Rite of Election, candidates and catechumens are welcomed into the Church by the local bishop, according to Father Jonathan Gaspar of the archdiocese's Office for Worship and Spiritual Life said.

All catechumens and candidates will be fully received into the Church during their parishes' Easter Vigil services on April 23. Catechumens like Elpers receive all the Sacraments of Initiation -- baptism, Eucharist and confirmation -- while candidates receive Eucharist, confirmation or both.

"It's always a great celebration for the Church throughout the world to welcome men and women who have been led by God to the Catholic Church," said Father Gaspar.

Father Gaspar was impressed at the number of people present at the rite. The fact that there were so many taking part in the service "in a day and an age where the Church is struggling with its issues is a great testament to the work of God and the power of the Holy Spirit in the hearts of these folks that presented themselves," he said.

Cardinal O'Malley addressed the archdiocese's catechumens and candidates during his homily.

"We welcome you, and we thank you for responding to the call of grace that led you to this commitment in the Catholic Church," the cardinal said.

He also discussed how converts have contributed to the Church throughout its history, and reminded this year's catechumens and candidates about their call to Catholic discipleship.

"We welcome you, our new Catholics, and thank God for the spiritual gifts you bring to the faith community," Cardinal O'Malley said.

Catholics are called to live according to God's will and "to be part of a communal mission to spread the Gospel, do the works of mercy," he continued.

The cardinal also reminded them that "discipleship is lived only in community."

"I'm excited," said Elpers, who will be receiving the sacraments and entering into full communion with the Church at her parish Easter Vigil at St. Elizabeth of Hungary Church in Acton.

Elpers was raised in a non-religious household and never baptized. Although both sides of her family were Catholic, her parents never went to Mass.

The only times Elpers attended Mass was if she went with friends, and before having a family of her own, the only time she attended was on Christmas and Easter.

She said attending Mass without being able to fully participate was difficult for her, but she wanted to learn more about the Mass.

"I didn't understand, and I wanted so much to understand what I was missing and what they were a part of," Elpers said.

Elpers said she even attended other Christian churches at times, but she was most drawn to the Catholic Church's history, tradition and Mass.

"There was something spiritually so special about the Catholic Mass for me," she said.

Through raising her children Catholic she became more involved in the Church, ultimately deciding to be received into full communion.

"Now that I'm part of something so big and so beautiful, words cannot describe the feeling," Elpers said.