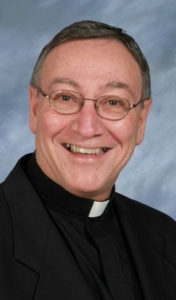 Father R. Michael Guarino has been granted senior priest/retirement status by Cardinal Seán P. O'Malley, the effective of the change in his status was March 1. Until his retirement he had been pastor of St. Anthony of Padua Parish in Revere.

Born in Framingham on March 3, 1942, he was raised in nearby Ashland in St. Cecilia Parish. He was the second of the four children -- two boys and two girls -- of the late Samuel and Elena (Perini) Guarino. He is an alumnus of Framingham's Marian High School, and following high school he entered archdiocesan seminaries studying for the Cardinal O'Connell in Jamaica Plain and then at St. John in Brighton. Richard Cardinal Cushing ordained him to the priesthood at Holy Cross cathedral on May 29, 1968.

His first assignment was as an associate at St. Mary Parish in Ayer, where he served following ordination until 1971 when he was appointed chaplain at his alma mater, Marian High School. He served there as chaplain until 1978; part of the time as chaplain he lived in residence at St. Theresa of Lisieux Parish in Sherborn. In 1978 he went to St. Mary Parish, Franklin as associate and there he inaugurated the St. Rocco festival, bringing the large Italian population of the town and parish together annually for a festival in honor of a favorite saint -- who is also the baptismal patron of Father Guarino, who prefers Michael, but who was baptized Rocco. He remained at the busy parish in the southwestern corner of the archdiocese until 1983 when he went up to Amesbury as parochial vicar at St. Joseph Parish.

In 1985 he took a leave of absence from active priestly ministry; he returned to become parochial vicar at St. Thomas Aquinas in Bridgewater in 1997. Two years later he went to Revere as administrator of two parishes: St. John Vianney in the Point of Pines section and St. Theresa of Lisieux. With the reorganization of the parishes in Revere in 2001 he was named pastor of the new parish of St. Anthony of Padua on July 1. The challenge for him was to create one parish out of three: the two territorial parishes of which he had been administrator and the personal parish of St. Anthony.

His retirement from the parish and community that he "has loved and served since 1999" was not something he relished but was brought on by medical needs and his declining health. In his retirement he has relocated to Sarasota, Fla. And as he observed, you don't retire from the priesthood you retire from administration, so he said he would be available as his health permitted to assist at any one of several parishes in the city of Sarasota.