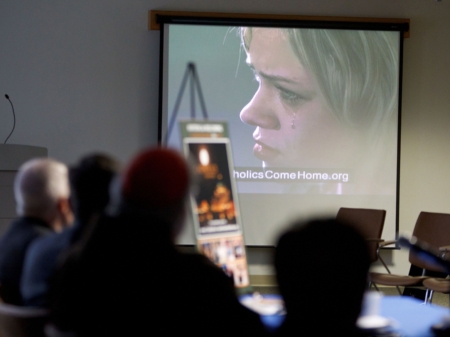 Cardinal Seán P. O'Malley and other participants at the press conference launching the Catholic Come Home campaign watch a video of the campaign at the Pastoral Center in Braintree March 9. Pilot photo Gregory L. Tracy

BRAINTREE -- The Archdiocese of Boston began this Lent by formally launching Catholics Come Home, a nationwide initiative to welcome lapsed Catholics back to the Church.

The archdiocese kicked off the initiative with a press conference at the Pastoral Center in Braintree on Ash Wednesday, March 9, followed by a Mass with Cardinal Seán P. O'Malley.

In his remarks, Cardinal O'Malley acknowledged that many Catholics have drifted away from the Church in recent decades for various reasons.

"Whatever the reason, we are here today to launch an evangelization initiative that reaches out to them and says, 'We miss you. Our worshiping communities are diminished because of your absence and we want you to return,'" Cardinal O'Malley said.

Catholics Come Home will use a barrage of radio and television commercials to blanket greater Boston's airwaves this Lent, inviting fallen away Catholics to return to the Church. In addition, individual parishes will be welcoming such Catholics back to their faith communities in their own ways.

Founded 13 years ago by Tom Peterson, an award-winning advertising executive, Catholics Come Home was started to address the growing numbers of Catholics abandoning the regular practice of the faith.

In Boston, weekly church attendance has fallen from around 70 percent of registered Catholics in the 1970s to a low of about 17 percent today.

According to Peterson, the initiative has led to increased Church attendance in dioceses nationwide, with gains ranging from 10 to 18 percent.

Peterson said that the Archdiocese of Boston is the 30th diocese in the United States to run the effort, including the nearby the dioceses of Manchester and Providence.

In his remarks at the press conference, Scot Landry, the archdiocese's Secretary for Catholic Media, referred to Catholics Come Home as "the largest initiative for Boston in terms of outreach for over a generation."

It is estimated that 92 percent of the Eastern Massachusetts viewing audience will see at least one of the television spots over the 6 week season, said Archdiocese of Boston Secretary of Faith Formation and Evangelization Janet Benestad, who is spearheading the effort.

"Using these commercials, the Church is able to speak to people we do not normally reach," Benestad said.

The ads were funded through the archdiocese's Evangelization Sunday collection in January, which raised nearly $600,000, Benestad said.

While the commercials will invite lapsed Catholics to return, the parishes will be charged with welcoming them and retaining members of the flock.

To prepare parishes the archdiocese ran workshops to train staff in the best practices in welcoming returning Catholics, and many parishes have organized their own unique activities as part of the Catholics Come Home initiative.

One pastor, Father Paul Soper of St. Albert the Great Parish in Weymouth, addressed the press conference on the open house his parish hosted on Ash Wednesday.

That day the church was open for 24 consecutive hours for confessions, the distribution of ashes and for returning Catholics to speak with parish staff about their faith experiences. Two Masses were also held that day.

Father Soper estimated that by the mid-afternoon hours, there were about 45 people visiting the church.

Even as the Archdiocese of Boston begins its rebuilding effort, members of the media asked how the effort may be affected by news of the clergy sexual misconduct surfacing in Archdiocese of Philadelphia.

"When the Church doesn't handle these well, or cover it or whatever the case, it does not do any good to the whole Church," Cardinal O'Malley said in response to an inquiry by a reporter.

He also spoke of what the Church has done since the scandal surfaced in 2002. Specifically, Cardinal O'Malley mentioned the U.S. bishops' Charter for the Protection of Children and Young People.

"We want the Church to be the safest place possible for young people," Cardinal O'Malley said.

The cardinal admitted he was "worried" the news from Philadelphia would affect today's Church.

Cardinal O'Malley continued, "On the other hand, I believe that Jesus Christ has the answers for the problems of our life and we are a link to be able to communicate that message."

Given that some Catholics have left the Church over disagreements with Church teaching on social issues, Cardinal O'Malley said, "we want people to come back and be part of the Church. We need to do a better job explaining what the Church's teachings are."

"We can't have the opportunity if they are not talking with us," Cardinal O'Malley added.

Later that afternoon at a Pastoral Center Mass attended by parish staffs, archdiocesan employees, friends and family, Cardinal O'Malley expressed one hope he has for the Catholics Come Home initiative.

"We all need to realize that the Church exists to evangelize -- to make disciples of all nations. It's our responsibility to reach out to members of Christ's family, the Church," he said in his homily. "It's my hope that the Catholics Come Home initiative will make all of us ambassadors for Christ."