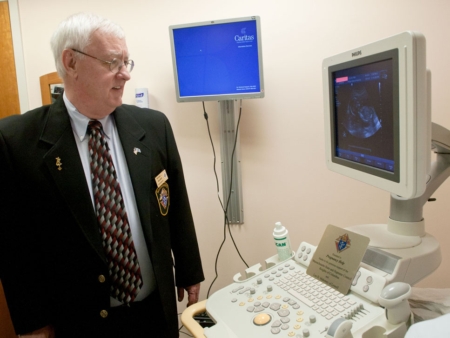 BRIGHTON -- Thanks to a private donation and a matching grant by the Knights of Columbus, clients of the Archdiocese of Boston's Pregnancy Help office will have access to an ultrasound machine that will allow them to see their babies developing in the womb.

Cardinal Seán P. O'Malley was joined by hospital administration, doctors, other health care professionals and members of the Mahoney family of Lowell as he blessed a new ultrasound machine at St. Elizabeth's Medical Center Mar. 8. The cardinal followed that with a visit to and blessing of Pregnancy Help's new, larger office suite in the nearby Brighton Marine Health Center.

"We're very grateful to the Knights of Columbus and all they do to support the Gospel of Life," Cardinal O'Malley said in his remarks at the hospital. "We're so delighted to see the synergism continue between the pro-life office and St. Elizabeth's Medical Center."

The machine was donated to the Archdiocese of Boston's Pregnancy Help office but will be housed at St. Elizabeth's Medical Center but Pregnancy Help clients will have access to the ultrasound machine free of charge.

"It gives women in the early stages of pregnancy a more informed choice about what they are doing," said Marianne Luthin, the director of the archdiocese's Pro-Life Office.

Luthin added that a majority of her work is with women who have already had abortions.

"So many of them have expressed the deep regret that when they learned they were pregnant, no one gave them any option other than abortion, and many frankly have no idea of the development of a child in the early stages of pregnancy."

Funding for the machine was provided through a substantial donation by the late Leo Mahoney, of Lowell, and a matching grant from the national Supreme Council of the Knights of Columbus.

The Supreme Council of the Knights of Columbus offers an Ultrasound Initiative to match funds raised at the state level towards purchasing ultrasound machines.

"The purpose is to save babies' lives," said Massachusetts State Deputy Michael Baldner.

He also noted that a majority of mothers who see their baby on ultrasound choose not to have an abortion.

"The success rate when a mother sees the baby is very high," he said.

Baldner said that for a group to receive a funded machine, they have to be approved by their respective diocesan pro-life office and have to embody Catholic values.

However, Baldner said they do not necessarily have to be Catholic to qualify.

The ultrasound machine in Brighton is the second one placed by the Massachusetts Knights of Columbus. About 18 months ago, the state council helped fund a machine at Problem Pregnancy of Worcester.

She said she hopes the new office will be more than simply an office for her clients.

"We're hoping this place will be a place for women to come -- not just an office," Girard said. "It will be more than just coming in for an office visit."