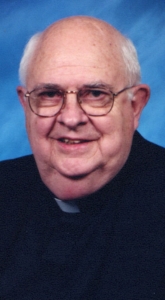 A priest of the archdiocese with years of service to parishes and to the United States Air Force, Father Robert Bergeron died at St. Patrick Manor, Framingham on Feb. 25. He had been living at the Framingham facility for some months; previously he had resided at Regina Cleri in Boston. He was just a month shy of his 83rd birthday.

Born on March 10, 1928 in Marlborough, he was one of the three children of the late Arthur and Edna (Harpin) Bergeron. His brother, Father Arthur Bergeron, also a priest of the archdiocese died in 1996; he had one sister, Lorraine Cascio, formerly of Needham who is also deceased.

After attending Catholic elementary school in Marlborough he went to the high school seminary in Joilette, Quebec. He came back to the archdiocese and completed his philosophy and theology studies for ordination at St. John's Seminary, Brighton. Archbishop Richard Cushing ordained him to the priesthood at Holy Cross Cathedral on Jan. 10, 1952. He quickly attributed his family and priests of his home parish as important influences on his priestly vocation.

He also received a masters degree in public administration from George Washington University in the nation's capital.

At his retirement from parish ministry in 1998 he told The Pilot that "with 17 moves in 27 years and basically being all over the world, I learned that no matter where you go people are people." He recalled also with pride that while a chaplain he worked closely with young people and one of his fighter pilots in Okinawa was subsequently ordained a priest for the Cheyenne diocese.

Returning to the archdiocese he was appointed initially administrator (1983) and then pastor (1985) at St. Joseph (French) Parish in Waltham. He retired from that parish but remained available as parochial vicar, first at St. Therese Parish, Dracut and St. Catherine of Alexandria, Westford. He was granted senior priest status on March 10, 1998.