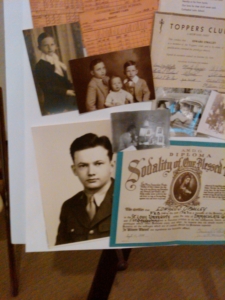 'Uncle Ed was part of what they call the 'Greatest Generation,' those who came through the Great Depression and World War II.' Pilotphoto/CardinalSeansBlog.org

This past week (2/21), we marked the passing of Dr. Bernard Nathanson. His funeral Mass was held at St. Patrick's Cathedral in New York City.

Though at one time he was a self-professed Jewish atheist and one of the architects of legalized abortion in the United States, by the end of his life he had become a Catholic and a great apostle for the Gospel of Life. ...my first real contact with him came in about 1985 when friends of mine from Honduras had called to tell me there was legislation to de-penalize abortion in their country. ... I called Bernard Nathanson, who was in New York at the time, and asked him to accompany me to Honduras. I explained that I was going there because my friends in the country asked if I could be of any help to them. He told me he had just had his documentary film "The Silent Scream" translated into Spanish and that he would be happy to go. We traveled to the capital, Tegucigalpa, where he addressed physicians at the university medical school and the country's legislators. We also had him make appearances on television, and speak at rallies. I served as his translator throughout the trip.

The happy ending to the story is that, ultimately, the law was repealed.

Before we left Tegucigalpa, a close friend of mine who had been a parishioner of mine in Washington gave him a little crucifix.

A couple of years later, I saw Bernard at a pro-life meeting in Venezuela and he came over to say hello to me. The first thing he did was reach in his pocket and pull out the crucifix. He then told me that he was so grateful for that trip to Honduras, and that his only regret was that he didn't take his wife along with him. At the time, I thought "This man is on a journey of faith." Sure enough, a few years later, in 1996, Cardinal John O'Connor received him into the Church in New York. When he was later asked why he converted to Catholicism, he said "No religion matches the special role for forgiveness that is afforded by the Catholic Church."

This man who had aborted so many children and fought to legalize abortion was completely converted into a pro-life Catholic. I think there is a great lesson in that for all of us. Sometimes people in the pro-life movement lose sight of the fact that one of our goals has to be to try to lead people to the light of Christ and out of darkness. Even though some of these people may evoke such anger or disgust in us because of their positions on abortion, we must never stop praying for them, loving them and hoping they will receive the graces Bernard Nathanson received, which helped him to find the truth and discover in Christ the answer to all of the questions of his life.

Then, last Monday (2/28) I went to Ohio to bury my Uncle Ed, who was very close to all of us. He was my father's brother and my last living uncle. He was a brilliant doctor, a very dedicated Catholic and a wonderful father to his family. When we were children, he was a very important part of our lives. I last talked to him on January 1st, which was his birthday. I was so happy that I was able to be there to celebrate Mass with my aunt and so many members of our family.