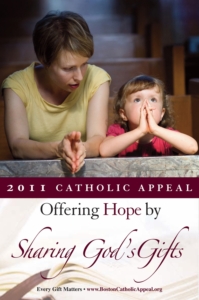 BRAINTREE -- Cardinal Seán P. O'Malley launched the 2011 Catholic Appeal March 5 and 6 in parishes across the Archdiocese of Boston.

The cardinal kicked off the archdiocese's major fundraising effort in person at three parishes -- Blessed Mother Teresa of Calcutta in Dorchester on March 5 and St. Michael's in North Andover and St. Bridget's in Framingham on March 6. Mass attendees from other parishes saw video recordings of the cardinal's homily.

"Our annual collection has many dimensions," Cardinal O'Malley said in his video homily. "It allows us as Christ's family to have a sense of ownership for the works of mercy and evangelization of our Church and it helps us to be connected with each other in a common mission."

The video homily can be seen in its entirety on the Catholic Appeal's website, www.BostonCatholicAppeal.org.

"Without the Catholic Appeal, the responsibility to provide these educational and enrichment ministries would return to the local parish level," the archdiocese said in a statement announcing the launch.

"By nourishing the ministries and mission of the archdiocese -- a community of faith that reaches beyond the boundaries of any one parish -- we share our faith with others," the statement continued.

According to Secretary for Institutional Advancement Kathleen Driscoll the appeal enables the archdiocese "to support programs and initiatives that assist the needy, our youth, parishes and schools.

"Our commitment to evangelization and vocations are examples of the importance we are placing on planning for the future," Driscoll said.

She also lauded the "generosity of thousands of committed and caring Catholics and benefactors" which is impressive in these ''still challenging economic times."

"By the Grace of God we are building up our Church now and for the future generations of Catholics," she continued.

Support for the appeal has increased in recent years, both in terms of donor participation and dollars raised.

Final results of the 2010 appeal have not been released, but in an e-mail to The Pilot, Driscoll said a majority of donors maintained their 2009 level of support in the 2010 appeal. Parishes exceeded their total support of the 2010 Catholic appeal by over $300,000 from the 2009 fundraising effort.

"These results are very much in line with the expectations of archdiocesan leadership entering the campaign and encouraging as we begin the 2011 Catholic Appeal," Driscoll said.