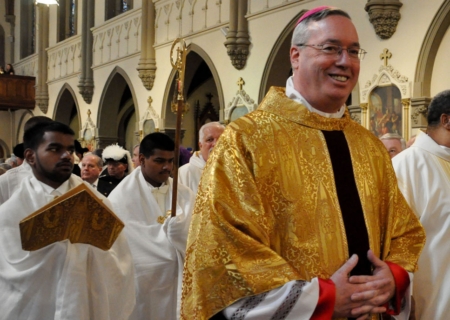 Reggie and Cyrus Sethna hold the mitre and crosier of Bishop Christopher Coyne during the opening procession his ordination Mass March 2. Photo courtesy The Criterion

BRAINTREE -- When Bishop Christopher Coyne was ordained a bishop in Indianapolis March 2, he was joined by parishioners of his former Westwood parish. Among them were two young men whom he had mentored in a special way.

These young men had served many Masses with Bishop Coyne as teenagers, and they served him in that same role at his ordination Mass March 2 at St. John the Evangelist Church in Indianapolis.

Reggie and Cyrus Sethna are twins, and both were altar servers at St. Margaret Mary Parish in Westwood when Bishop Coyne was the pastor there.

The Sethnas were adopted from India at age 2 and have been parishioners at St. Margaret Mary's ever since.

Both boys were born with a genetic, life-threatening heart condition; Cyrus also has significant learning disabilities, as well as Parkinson's Disease.

Besides administering the boys their sacraments, including the Anointing of the Sick, Bishop Coyne has served as a spiritual guide for them.

Bishop Coyne has worked to make Reggie a visible part of the parish community and helped him through some social challenges he recently faced.

"Even though I was older, Father Coyne asked me if I'd like to serve," he said. "I took it as an invitation."

Along the way, Bishop Coyne has become a mentor to Reggie, helping him discern his potential call to the priesthood, and to deal with bullying when fellow students learned he was considering a vocation.

Reggie's brother, Cyrus, was also an altar server in the past and recently became an usher, welcoming worshipers to Mass and taking the offertory collection.

"They're just great guys that have gone through so much, with the help of their mother and father," Bishop Coyne said.

"They've always been a huge part of St. Margaret Mary's," he added. "The community has seen them grow up from sick little boys to the men they are now."

In addition to the Sethnas, Bishop Coyne was assisted at the altar for his episcopal ordination by Deacon Joseph Holderried, also of St. Margaret Mary Parish.