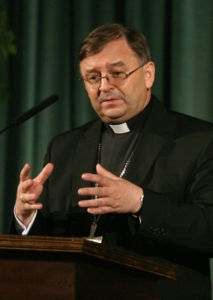 Polish Archbishop Jozef M. Zycinski of Lublin is seen presenting a lecture at Immaculate Conception Seminary in Huntington, N.Y., in 2005. Zycinski, a theologian and philosopher, died Feb. 10 at his Rome home and the cause was still being determined. He was 62. (CNS photo/Gregory A. Shemitz, Long Island Catholic)

WARSAW, Poland (CNS) -- Polish church leaders paid tribute to Archbishop Jozef Zycinski of Lublin, who died at age 62 in Rome Feb. 10, by recalling him as a priest who contributed to the development of dialogue between faith and culture.

"The church in Poland has lost a priest and bishop marked by great spirit and intellect," Archbishop Jozef Kowalczyk of Gniezno said in a Feb. 10 statement.

"He greatly esteemed his priests in a spirit of Christian personalism learned from John Paul II and brought much good to inter-human relations," Archbishop Kowalczyk added.

Archbishop Zycinski died while in Rome for a meeting of the Congregation for Catholic Education at the Vatican.

No specific cause of death was given.

"He was a protector of all important Polish church matters," Archbishop Jozef Michalik said Feb. 10. "Although it was sometimes thought he moved along his own paths, he also had great sensitivity, often reacting in defense of the misunderstood."

Born near Piotrkow Trybunalski Sept. 1, 1948, the year communist rule was consolidated in Poland, Archbishop Zycinski was ordained in 1972. He received his doctorate in theology from the Pontifical Academy of Theology in Krakow in 1976. He later received a second doctorate in philosophy from the Academy of Catholic Theology in Warsaw.

After seven years as bishop of Tarnow beginning in 1990, where he was Poland's youngest ordinary, he was appointed archbishop of Lublin in June 1997. He also became grand chancellor of the Catholic University of Lublin and was named to the Pontifical Council for Culture.

Besides chairing the Polish church's influential Catholic information agency, KAI, he was a member of international bodies including the John Templeton Foundation. A prolific author on issues relating the intersection of faith and culture, he published numerous books and many articles on the topic.

Tributes to the archbishop's work for ecumenical and interfaith relations were paid by Orthodox Archbishop Abel of Lublin-Chelm and Rabbi Michael Schudrich, chief rabbi of Poland.

Meanwhile, Cardinal Kazimierz Nycz of Warsaw said Archbishop Zycinski would "leave much behind him as a pastor, student, philosopher and man of the church."

"He contributed many things, thanks to his huge knowledge, to the church's internal discourse between people of faith, but also to the discourse with people searching," Cardinal Nycz told the KAI agency.

"He had clear-cut opinions on many subjects, and it was his great concern and pain that his commentaries weren't always accepted or understood," the cardinal said.

The late archbishop's secretary, Father Tomasz Adamczyk, who was with him in Rome, told KAI that the prelate died unexpectedly while resting before a scheduled meeting with Lublin archdiocesan priests.