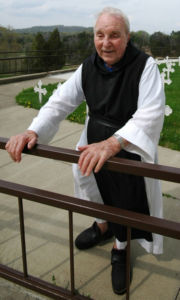 Trappist Father Matthew Kelty, a monk of the Abbey of Gethsemani in New Haven, Ky., known for his talent for writing and speaking, died Feb. 18 after a brief illness. He was 95 and had been a priest for 64 years. He is pictured in a 2007 photo. (CNS photo/John Cremons)

TRAPPIST, Ky. (CNS) -- Trappist Father Matthew Kelty, a monk of the Abbey of Gethsemani known for his talents of writing and speaking, died Feb. 18 after a brief illness. He was 95 and had been a priest for 64 years.

An announcement about his death on the abbey's website, www.monks.org, said, "Father Matthew was one of the community's most prominent members, who touched many retreatants over the years with his compline talks, and many more people around the world with his writings."

Father Kelty, it said, "was an Irishman with, as he put it, the 'gift of the gab.' He once said, 'I can talk and I can write,' which he considered nothing special. They were gifts, but he used them to reach and help other people."

Born Charles Richard Kelty Jr. in South Boston, Mass., Father Kelty joined the Society of the Divine Word as a young man and was ordained a priest in 1946. He served as a missionary in Papua New Guinea from 1947 to 1951, and then worked for the society's magazine in Techny, Ill., from 1951 to 1960.

He entered the Abbey of Gethsemani in February of 1960 and made final vows in 1962. In 1970, he was sent to a small, experimental monastery near Oxford, N.C., the abbey's website said. He returned to Papua New Guinea, living in a hermitage there until 1982. Afterward, he returned to Gethsemani.

On Father Kelty's section of the abbey's website, Father Kelty wrote in first person about his life at Gethsemani.

"A natural love for monastic life drew me to Gethsemani and fulfilled a lifelong dream," he wrote. "Over the past decades I have served in various capacities: master of the brothers, shoe shop, tailor shop, vocations office retreat house.

"Monastic life is everything I wanted, my happiness. All dreams fulfilled," he added. "But the fulfillment came slowly. Following your dreams and not giving up is my best recommendation."

Father Kelty's homilies from 1992 to 2006 are available on the monks.org website.

In addition to his homilies and speaking presentations, Father Kelty wrote several books, including "My Song Is of Mercy," "Call of the Wild Geese" and "Singing for the Kingdom." He was also the subject of a documentary made by Morgan Atkinson, "The Poetry of a Soul."

As a young monk, he once was the typist for Trappist Father Thomas Merton, who also was his mentor.

Father Kelty was predeceased by his parents, Charles Richard Kelty and the former Mary Jane Watson, and his siblings Louis, Marion and Helen. He is survived by his nephews and the monks at Gethsemani.

A Mass of Christian burial was celebrated Feb. 21 at the abbey.