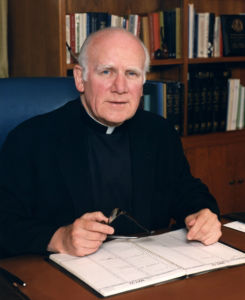 VILLANOVA, Pa. (CNS) -- Augustinian Father John M. Driscoll, the former president of Villanova University for whom the school's College of Nursing building is named, died March 2 at the age of 87.

Father Driscoll, who headed the university from 1975 to 1988, had lived at St. Thomas Monastery in Villanova from 1995 until his death. No cause of death was announced.

An evening funeral Mass was scheduled for March 7 in the St. Thomas of Villanova Church, with burial on campus the next morning.

Augustinian Father Peter Donohue, current Villanova president, said Father Driscoll "led a period of tremendous growth and advancement at the university," with expansion of the campus and the construction of new dormitories and other buildings.

"That same period saw an increase in the university's academic reputation as the student body grew more select and geographically diverse, the academic curriculum more innovative and challenging, and the faculty more distinguished," he added.

After graduating from Villanova with a bachelor's degree in philosophy in 1948, he studied for the priesthood at Augustinian College and The Catholic University of America, both in Washington, before his June 5, 1951, ordination at what is now the Basilica of the National Shrine of the Immaculate Conception in Washington.

Father Driscoll was first assigned to teach at Archbishop Carroll High School in Washington, 1952-56, and then taught at Merrimack College in North Andover, Mass., 1956-60. He returned to Washington and from 1960 to 1961 lived at Augustinian College. He completed his doctoral studies in philosophy at Catholic University in 1964.

From 1961 to 1965, Father Driscoll held a variety of posts at Merrimack College, including philosophy teacher, vice president and dean, religious superior of Our Mother of Good Counsel Monastery and as a member of the college's board of trustees.

In 1965 he was assigned to St. Thomas Monastery on the Villanova campus. He served as vice president for academic affairs at the university, 1965-75, before beginning his 13-year tenure as Villanova's 30th president.

As president, Father Driscoll presided over the approval and accreditation of the master's program in nursing, the founding of the Nursing Alumni Society, the awarding of Villanova's first Presidential Scholarship to a nursing student, and the awarding of the first College of Nursing Medallion.

Driscoll Hall, which opened in 2008 as the home of the College of Nursing, "serves as a worthy memorial to Father Driscoll and his many accomplishments as an alumnus, educator and Augustinian," Father Donohue said.

After stepping down as president, Father Driscoll went back to Merrimack College, where he was assigned to be the prior of the Augustinian community there.