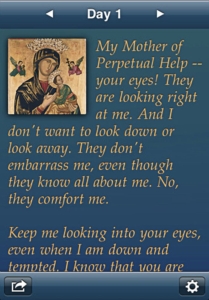 Redemptorists have released the first ever Our Lady of Perpetual Help novena app for the iPhone and iPad. Courtesy photo

The Massachusetts Supreme Judicial Court has agreed to hear an appeal by Regis College in Weston challenging a state Land Court decision last year to deny plans to expand its campus for educational use.

The state's Dover amendment was designed to protect educational and religious organizations from unreasonable local zoning regulations. However, in January 2010, for the first time, the Land Court disregarded Dover, its legislative history and the cases interpreting it, as applied to private, non-profit colleges.

According to college officials, Regis East is an educational use in accord with the Dover amendment, and thus should be exempted from Weston zoning by-laws, which now restrict any building on the 60 acres of undeveloped college-owned land.

The Regis East proposal calls for several buildings to be built on Regis property as the college works to create a multi-generational learning environment. The proposed addition would include classrooms to be used by children, adults and college students for computer labs, libraries and clinical teaching space. Also included are up to 362 residential units for senior citizens, all linked to the education resources of the existing campus.

Each resident would have an individualized learning plan and be required to take at least two courses each semester, four courses each year.

Regis East would provide internships to Regis College students in gerontology, social work and management. Students at all levels of nursing education will have rotation opportunities on the East Campus.

A date has not yet been set for the SJC hearing.

On Feb. 24, the Presentation School Foundation hosted a groundbreaking ceremony for a new community center that will be built on the grounds of the former Our Lady of Presentation School, closed by the Archdiocese of Boston as part of the 2004 reconfiguration process.

The Presentation Foundation purchased the building in Brighton's Oak Square from the archdiocese in 2007 and since then raised money for the renovation project with support from the city and state, as well as private foundations.

The third annual New England Catholic Homeschool Conference will be held June 25 at St. Stanislaus School in Chicopee. The theme of this year's gathering will be "Answering our Baptismal Call," and will include several talks and vendors for homeschoolers and those considering homeschooling their children.

Deacon Eugene McGuirk, Director of Academic Counseling for Seton Home Study School, will speak on "Why Should I Study That?-- I'll Never Use It Again!" His talk will explore why development of the whole person is important. Dr. Steve O'Brien, visiting lecturer at Bridgewater State University and online instructor with Regina Coeli online academy, will be joined by his wife, Katie O'Brien, homeschooling mother of four who also oversees the high school program at St. Thomas Aquinas School in West Warren, Massachusetts. They will be speaking on Retrieving Catholic History and infusing a sense of Catholic culture and history in students.

The Baltimore Province of the Redemptorists have released the first ever Our Lady of Perpetual Help novena app for the iPhone and iPad.

The app guides users through a nine-day novena praying with the icon. It features a prayer for each day, and all prayers written by Redemptorist Father John Hamrogue.

"For the first time ever, it will be possible to pray a novena to Our Lady of Perpetual Help on iPhones and iPads," said Father Daniel Francis, director of the Redemptorist Office for Mission Advancement, which produced the app. "Our hope is that it will turn viewers into pray-ers, and curious Catholics into devotees of Mary."

The app was released Feb. 4 and is available from the iTunes app store for $0.99.