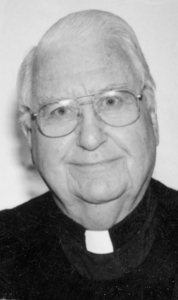 Msgr. Thomas Finnegan, the last priest to serve as chancellor of the archdiocese during the Cushing years died in Falmouth on Feb. 16. He had been living in the Cape Cod community since his retirement as pastor of St. Elizabeth Parish in Milton on June 15, 1994.

A Boston native where he was born on Aug. 8, 1919, the only child of the late Thomas and Agnes (Barry) Finnegan, he was raised in the Hub's Brighton section and attended both the elementary and high school of his home parish, St. Columbkille. Among his contemporaries in those years was Springfield's retired Bishop Joseph Maguire.

Both continued their education up the street from their homes at Boston College graduating in the Class of 1941. While Joe went immediately to the seminary from college, Tom studied for a year at Boston College's Law School and then entered the US Army, serving in the Battle of the Ardennes.

Returning home, he entered St. John's Seminary and Archbishop Richard Cushing ordained him to the priesthood at Holy Cross Cathedral on April 11, 1951. His first and short-lived parish assignment was as an assistant at St. Mary Parish in Chelmsford where he served just over 18 months.

In October 1952 the archbishop entrusted him with the first of what would be a series of appointments in the archdiocesan curia lasting until 1973, naming him to the staff of the Metropolitan Tribunal while he was part time at St. Joseph Parish in Boston's West End.

In March 1955 he was named assistant chancellor of the archdiocese, vice chancellor in 1961 and chancellor in 1968. Concurrent with these appointments were other archdiocesan positions: Director of Vocations and Chaplain of the Serra Club (1955-1968); Director, Nocturnal Adoration Society (1961-1968); as well as membership, ex officio, on numerous archdiocesan boards, committees, commissions and consultative bodies.

Blessed John XXIII named him a Domestic Prelate, today a Prelate of Honor, with the title of Rev. Msgr. on Nov. 25, 1961 enrolling him in the papal household.

He was at the center of the administration of the archdiocese during the boom years of the '50s and early '60s, and for the greater part of the tenure of Archbishop Cushing. Although seen and, perhaps experienced by some, as gruff and direct, perhaps left from his military experience, if you were able to chat with him in his later years, especially about the "Cushing Years" he could wax eloquent and long about "The Cush." He clearly regarded those years as the "golden years" of the archdiocese and was neither shy nor restrained in his comments on subsequent administrations or archbishops for that matter.

One of the great stories about him was that while he was chancellor he reduced construction costs at St. Elizabeth Church in Milton by eliminating the air conditioning that had been proposed for the new church. Apparently the ducts, etc. were still left and constructed. On April 10, 1973 he found himself named as pastor of the same Milton parish; this had the priests asking "What will he do about the air conditioning or lack of it?" Another was that at Milton his major extraordinary administrative expense was repaving the large parking lot every five years and re-lining the parking spaces; and, of course, the snow removal bills.

As at chancery so also at Milton he ran a tight ship and was careful in the administration, read spending, in the parish. He was tough and demanding but no less of himself than of others.

In retirement he lived at Falmouth and until recent years was a regular fixture at both daily and Sunday Masses in local parishes. His health has been declining in the past few years, but he resolutely determined to stay home, in Falmouth until the last possible moment.

Msgr. Finnegan was buried in the National Cemetery, Bourne on Feb. 22. He leaves no immediate survivors.