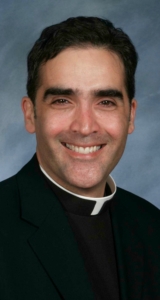 Cardinal Seán P. O'Malley, OFM Cap. has appointed Father Joseph Mazzone, until now the parochial vicar at Sacred Heart Parish in Weymouth, as the pastor of St. Mary of the Assumption Parish in Hull. The appointment was effective Feb. 1.

Born in Providence, Father Mazzone is one of the four sons of Theresa and the late Remo Mazzone. His brothers are Thomas, Stephen and Raymond. He grew up in Cumberland, R.I. and attended the local public schools and was graduated from Cumberland High School. He went on to complete his undergraduate studies at the University of Notre Dame. It is his family that he credits with his solid foundation in the Catholic faith; citing the baptismal rite he said his parents were the "first and best teachers of their child in the ways of the faith" both by word and example. The priests in his parish were also influential and familiar to the family.

After his professional career, he was accepted at Blessed John XXIII Seminary in Weston as a candidate for the archdiocese of Boston. During his seminary formation, in addition to academic courses, he served in pastoral formation in several parishes including Holy Trinity, Quincy; St. Catherine of Siena, Norwood; and St. Angela, Mattapan. His deacon internship was at St. John the Evangelist Parish in Winthrop.

With the Eucharist as his focus in life, he told The Pilot that he is looking forward to "bringing the Eucharist to the parishioners in Hull and to praying with them." He is enthusiastic about his new assignment and has heard of the active and involved parish that it is.

Asked about a young man considering a vocation to the priesthood he quoted Pope John Paul II, himself quoting Jesus, "Do not be afraid." "The priesthood is such a great life."

As he begins his new assignment Father Mazzone reflected on the many people over the course of my life "who have inspired me by their holy lives".... "I don't think people realize how much of an impact they have, beautifully, on the life a priest. I hope they will at Hull."