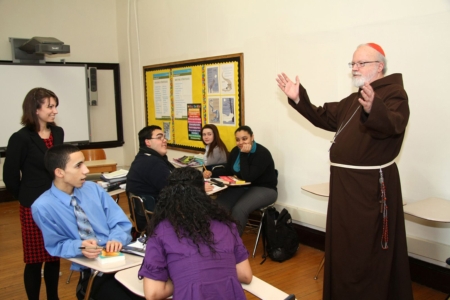 'Cristo Rey Boston is part of a network of schools that all follow the Cristo Rey model, an approach to education that was begun by Father John Foley in Chicago in 1995. ...It was a great joy to spend the day with these students of one of our fine Catholic schools.' Pilotphoto/CardinalSeansBlog.org

Last weekend (2/11), I participated in retreats with men considering the priesthood. We had two separate retreats -- one at Blessed John XXIII National Seminary in Weston, which of course was for older men, and a retreat for college students and college graduates considering St. John's Seminary. Each year we have these retreats. We had a combined total of about 60 men for both.

We had a Mass at Blessed John and I gave them a talk. Then I went to the Connors Family Retreat Center at Dover for the weekend to give a retreat for the other men. They heard witness talks from our seminarians and panel discussions. ...We ended with a beautiful celebration at St. John's Seminary, the Institution of Acolytes for 12 men studying at St. John's. The retreats were a great success. We're very grateful to all of the people who were praying for the spiritual success of these retreats and for those who encouraged the men to participate because the promotion of vocations is the obligation of every Catholic.

Thursday (2/17), I visited Cristo Rey Boston High School, upon my return from Dallas.

Cristo Rey Boston, as you may recall, was the former North Cambridge Catholic High School. This year, the school relocated from Cambridge to Dorchester, where it occupies the former St. William's School building. A former grammar school, they performed a beautiful renovation of the building, which adapted it to suit the needs of a high school. Jeff Thielman, the president of Cristo Rey Boston, gave me a tour of the school.

The new building was dedicated a few months ago but I could not attend. So, this was my first opportunity to see firsthand the great job they have done renovating the building. The principal, Father Jose Medina, is a priest originally from Spain who is a member of the Fraternity of St. Charles Borromeo, a priest fraternity related to Communion and Liberation. With him at the school is another priest from the Fraternity, Father Stefano Polombo, who teaches History and Religion.

Cristo Rey Boston is part of a network of schools that all follow the Cristo Rey model, an approach to education that was begun by Father John Foley in Chicago in 1995. Now, there are 24 of these schools in the country. They educate young people from urban families. Besides receiving a quality academic formation, they work one day per week in a job, alongside adult employees in businesses such as banks, hospitals, insurance companies and lawyers' offices. Their wages offset the cost of tuition.

Their salaries generate 70 percent of the budget for the school, and at the same time their work is preparing them for their own professional life. It is also a huge force in keeping them in school and motivated to study hard. In fact, a group of students from Cristo Rey Boston work at our Pastoral Center, assisting in various departments. It is surprising to see the poise and confidence with which these students interact with adults, which I think comes from their employment training. It was a great joy to spend the day with these students of one of our fine Catholic schools.