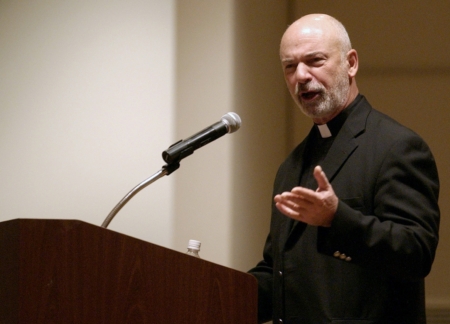 The one day conference, titled "The Church Persecuted," will be held on Aug. 6 at the Garden and consists of four talks from the priest, each lasting an hour or more. The day will conclude with a Mass celebrated by Cardinal Seán P. O'Malley. Tickets for the event went on sale earlier this month.

Last week, Father Corapi spoke with Scot Landry, the Secretary of Catholic Media for the Archdiocese of Boston regarding the upcoming conference. Landry will also serve as the conference's emcee.

When asked about the theme of the conference, Father Corapi responded that he would begin with the historical persecution of the Church, but then hone in on modern examples, concentrating on the more subtle types prevalent today.

"Members of the Church can be persecuted quite simply for their beliefs and this happens every day in Western society including the United States," said Father Corapi. He cited the example of those who are strongly pro-life.

Father Corapi rose to national prominence with regular television appearances teaching the Catechism on EWTN-TV. The former veteran, multi-millionaire, drug addict, and later one of Southern California's homeless, experienced a profound reversion to his Catholic faith that had been lapsed for 20 years.

Soon after this change of heart, which he described as "a rather radical, extraordinary type of conversion experience," Father Corapi entered Holy Apostle Seminary in Cromwell, Conn. in 1987. There he met Father Jim Flanagan of the Society of Our Lady of the Most Holy Trinity (SOLT). Within ten minutes of meeting John Corapi, Father Flanagan predicted his vocation.

"I thought he was going to tell me that I'm called to be a priest maybe in his group. But it wasn't like that at all." he said. "You have a charism, a gift called Apostolic preaching," recalling what Father Flanagan told Corapi.

The founder also told the seminarian that his mission would be to use his gift with the means of social communication and to follow the example of Archbishop Fulton Sheen, the famous television host of the 1950s, who currently has a cause open for canonization.

Father Corapi joined Father Flanagan's community and responded to this call of preaching. Known for his booming voice, and straight-talk speaking style, nearly 25 years later Father Corapi has given over 500 conferences and missions. His organization, Santa Cruz Media, based in Montana has modern television and radio broadcast facilities that allow him to feed his messages to various Catholic media outlets.

Though Father Corapi has an extensive academic background and prepares for his presentations, he credits the Holy Spirit for most of his message.

"I'm always the most interested person to see what I'm going to say," said Father Corapi.

One recipient of his preaching is Andy LaVallee, a Charlestown native and business owner in Waltham.

"First off I love his approach because I believe he's exactly what we need at this time right now," said LaVallee. "He reminds me of some of the old-time fathers' approaches, that there's no discrepancies. Everything is just right to the tee, direct, trenchant, here's the way it is: 'I'm not here to be your friend, I'm here to be your father.'" he continued.

LaVallee has bought tickets to the conference and is considering giving tickets to employees, friends and family.

Another fan of Father Corapi is Donna Chrisbaie of Rehoboth who is hoping that Father Corapi will bless her eyes at the conference. In 2006, Chrisbaie lost her eyesight to diabetes.

WQOM 1060AM is the newest affiliate of the Station of the Cross Catholic Radio Network based in Buffalo, N.Y. It began broadcasting in the Boston area on November 1 of last year with the blessing of Cardinal O'Malley.

"Boston is the ideal place to host our next conference," President and General Manager of the network, Jim Wright stated in a news release. "With the successful launch of our station in November, we look forward to broadening our listenership further and are excited to share the beliefs and values behind our programming live with a large audience."

"This conference will be one of the largest local gatherings of Catholics in 2011," added Cardinal O'Malley in the release. "The archdiocese is grateful to the Station of the Cross for hosting it in Boston. WQOM has already brought significant blessings to Catholics in our archdiocese and we hope this conference will help to gather many of WQOM's listeners and encourage many others to tune into 1060 AM. I look forward to joining the conference attendees and Father Corapi for the celebration of Mass."

Father Corapi mentioned that the Northeast is probably the toughest place that he has preached.

"A great Catholic tradition, but the intensity of the resistance to authentic Church teaching in certain areas; it's absolutely frightening at times," said Corapi.

However, this is not deterring the priest from predicting the outcome of the event.

"I can't guarantee very much in life, but I can guarantee you one thing: that the conference in Boston in August is going to be fantastic," said Corapi.