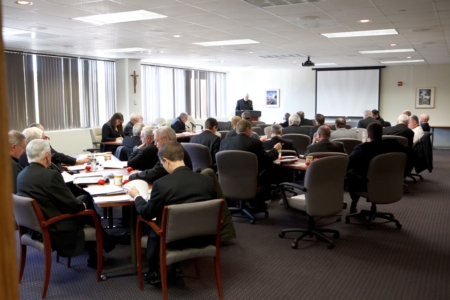 'Each month, I meet with the Presbyteral Council which is comprised of the auxiliary bishops and priests representing the different vicariates and ministries of the archdiocese.' Pilotphoto/CardinalSeansBlog.org

After my trip (to Israel) concluded, I went down to Florida to be with a number of our priests who are making a retreat there. For the last couple of years, Bishop Hennessey has organized a retreat at the Bethany Center for Boston priests. This year, 40 men went down. Father Jim Moroney, a priest of the Diocese of Worcester who also teaches at St. John's Seminary, gave most of the conferences. I went for two days to give some conferences and to be with the priests.

The St. Petersburg Diocese has recently built this wonderful retreat center near Tampa. It's a wonderful facility consisting of several buildings on two small lakes. The priests who have gone down for the retreats have been very, very pleased. The director of the retreat house, Father John Lipscomb, is a former Episcopalian bishop who is now a Catholic priest. The Diocese of St. Petersburg and his entire staff have always been very gracious to us.

The priests come together for Mass, lauds, vespers, night prayer and Eucharistic adoration. Opportunities for confessions are also offered. Many of Father Jim Moroney's conferences centered around the priest's role presiding at the liturgy. Father Moroney has been such a blessing for us. We are very grateful to Bishop McManus for allowing him to give so much time to the seminary, because liturgical formation is such an important part of their overall formation

Each month, I meet with the Presbyteral Council which is comprised of the auxiliary bishops and priests representing the different vicariates and ministries of the archdiocese. A very important part of the central administration of the archdiocese and the ministry of the archbishop is having this opportunity to hear directly from the priests on a whole range of issues. We have set up the Presbyteral Council so that the priest members who represent the different vicariates have an opportunity to go back and discuss with the priests of the vicariates the different issues that are discussed at the meeting. It's also a way of bringing new issues before us.

I find the priests are very serious about their participation. We have wonderful discussion. People are not afraid to disagree, but they do so respectfully. It's quite obvious everyone's greatest concern is the good of the Church and the ministry Christ has entrusted to us. It's always a wonderful experience, and we're grateful for the very important role Msgr. Dennis Sheehan exerts as the moderator.

Discussion on the Hispanic Ministry

Yesterday, I had a meeting with our new Hispanic apostolate director Father Francisco Anzoategui, more commonly known as Father Paco, Secretary of Faith Formation and Evangelization Janet Benestad, Secretary for Catholic Media Scot Landry and Father Michael Harrington, who heads our ethnic and cultural outreach efforts. We met to discuss Hispanic ministry, evangelization and the Hispanic presence in the media.

Father Paco was born in Mexico, and came to our archdiocese in 1997. He has served in various parishes. In addition to his role on our staff here at the Pastoral Center, he is the pastor of St. Stephen Parish in Framingham. He has been with us a few months now, and has been doing a wonderful job coordinating our ministry to the local Hispanic community. Our ministry to the Hispanic community is a very important one, given the fact that our already large Hispanic population continues to grow.