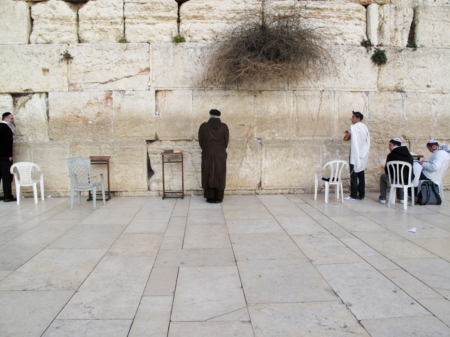 'So, we ended up having one more day in Jerusalem. It happened to be the Feast of the Presentation and we were able to go to the Wailing Wall, which is the only standing wall of the Temple of Jerusalem.' Pilot photo/CardinalSeansBlog.org

About 200 bishops attended the event this year. Fifty bishops came from the United States, including Bishop McManus of Worcester and Bishop Hennessey, one of our auxiliaries here in Boston. There were also eight cardinals, several Vatican officials and bishops from all over the world in attendance. Father Tony Medeiros, rector of our Redemptoris Mater Seminary, accompanied me

Father Rino Rossi, director of the Domus, welcomed us and told us that over 1,200 bishops have visited this place, as they have attended similar retreats in recent years. It is an impressive number, about one-third of the bishops in the world. He also told us that the center was dedicated by Pope John Paul II during his visit to the Holy Land in 2000.

The Domus Galilaeae is on the top of the Mount of Beatitudes where Jesus proclaimed the Sermon on the Mount. During the retreat there were different conferences on the history and the spirituality of the Neocatechumenal Way, mostly in the evenings, and we visited several holy sites during the morning.

Obviously, the spirituality of the Neocatechumenal Way, so much based upon baptismal mystagogia, is a grace for the Church and is allowing so many people to deepen their own baptismal commitment and to embrace a very radical form of Gospel life. Pope Benedict XVI met last month with 7,000 members of the Neocatechumenal Way and gave them a beautiful speech that underlines this aspect of their charism.

The centrality of the liturgy and the importance of the aesthetical -- to allow people to glimpse the beauty of God -- are obvious in everything that the Neocatechumenal Way does. The fact that the founder is a talented artist and musician also is a very important factor in the way that the Way has developed, and how they catechize and evangelize through the beauty of the liturgy, in song and in iconography.

... I would have to say the high point of the week was being able to celebrate the Mass at the Cenacle. The Cenacle is the "Upper Room," the place of the Last Supper, the place where Jesus appears to his disciples on Easter and where Mary and the apostles persevered in prayer before the outpouring of the Holy Spirit at Pentecost. It was a great privilege to be there.

Trip to the Wailing Wall

The following day (2/1), we were supposed to have returned to Boston, but Newark Airport was closed due to the snow storm that hit the Northeast. So, we ended up having one more day in Jerusalem. It happened to be the Feast of the Presentation and we were able to go to the Wailing Wall, which is the only standing wall of the Temple of Jerusalem. There we prayed the Nunc Dimittis of Simeon in which this devout Jew recognizes the baby Jesus as the Messiah. At the wall, we prayed for the intercession of Our Lady on behalf of all of our priests and people of the archdiocese.

Being in Israel during the time of political unrest in Egypt and Jordan helps one to understand the precarious and unstable nature of that region. Until political solutions that are based on justice can be reached, world peace will always be threatened. I encourage you all to join me in praying for peace in the Holy Land and all of those countries of the Middle East where there has been so much suffering.