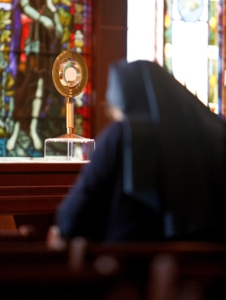 The World Day for Consecrated Life was instituted by Pope John Paul II in 1997 to recognize the contributions religious communities have made to the Church. It is marked by U.S. dioceses this on Feb. 6. Pilot file photo/ Gregory L. Tracy

BRAINTREE -- Along with the other dioceses of the U.S., the Archdiocese of Boston will mark the World Day for Consecrated Life during the Masses of Feb. 5 and 6.

Archdiocese of Boston Delegate for Religious Sister Marian Batho said the day is "an opportunity for people to learn more about consecrated life, and a chance for those already in religious life to renew their vows."

The World Day for Consecrated Life was instituted by Pope John Paul II in 1997 to recognize the contributions religious communities have made to the Church. The day also presents an opportunity to pray for vocations to the consecrated life.

Traditionally celebrated in Rome on Feb. 2, the Feast of the Presentation of Jesus in the Temple, U.S. parishes mark the World Day for Consecrated Life the weekend after Feb. 2.

"The Church believes this feast of the Presentation is significant for consecrated persons because by their evangelical witness they become, like Christ, lights of God's love in the darkness of the world," said a statement of the United States Conference of Catholic Bishops USCCB.

"We thank God for the service of many consecrated men and women who work in parishes, schools, universities, chanceries, hospitals, centers of social service, counseling and spiritual direction. So often, these men and women transform human need through their prayerful witness of the love of Christ by educating the unlearned, healing the sick, comforting the sorrowful, befriending the lonely," Archbishop Carlson said. "Their zeal and joy for doing God's will manifests the life and holiness of the Church."

Like several other Boston-area parishes, St. Patrick Parish in Roxbury will honor present and former members of religious communities at Masses on Feb. 6. Community members will fulfill various liturgical roles at the Masses such as lectors and Eucharistic ministers.

Members of religious communities in attendance will also renew their vows.

Posters depicting the histories of various religious communities to have served at St. Patrick's will be displayed throughout February.

"It's to give some prominence to the men and women who serve the Church through religious orders," said Father Walter Waldron, the parish's pastor. "Sometimes I feel they are reluctant to seek publicity so I do it for them."