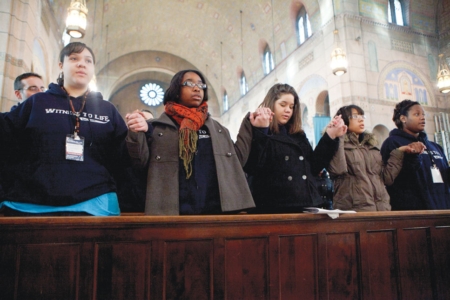 Students from Cathedral High in Boston join hands in prayer at the mass celebrated by Cardinal O'Malley at Sacred Heart Church in Washington prior to the March for Life Jan. 24. Pilot photo/ Gregory L. Tracy

WASHINGTON, D.C. -- The young pilgrims from Boston who descended on the nation's capital each brought their brought their own unique perspectives on the issue of abortion.

Genesis Cabral, 16, a junior at Cathedral High School in Boston's South End, said she had been "open-minded" on the abortion issue, but began to change her mind to support the pro-life position in a meeting with school officials about the Archdiocese of Boston's planned Pilgrimage for Life.

The archdiocese's Office for the New Evangelization of Youth and Young Adults annually brings hundreds of teens and young adults to Washington to experience the March for Life and other related events.

"I honestly thought it would be a mini vacation," she said.

However, when Cabral told her mother she was considering attending the March for Life, her mother urged her to go.

Cabral's mother explained that, when she was pregnant, doctors had urged her have an abortion.

Cabral's parents already had a son with sickle cell anemia and were fearful of the medical bills for a another child with the disease.

She said her mother was told abortion was the only feasible solution. Against the doctors' advice her parents decided to continue with the pregnancy.

"With sickle cell anemia or not, she still wanted me and I'm still here," said Cabral, who was not born with the disease.

Cabral now has a new perspective on the March for Life.

"Everyone has a chance in life, but I didn't really go deeper than that," she said. "It was more than that after my mom told me what happened to me and all the people involved and what they thought of it."

Emily Kent, 16, a sophomore at Cathedral, also went on the pilgrimage for the first time this year.

"Every child deserves a chance at life," she said.

Doctors had predicted Kent would have Down Syndrome when she was born.

In a homily given to the young marchers immediately preceding the march, Cardinal Seán P. O'Malley pointed out that 90 percent of Down's pregnancies are aborted.

She said she did not know if doctors tried to sway her mother.

"It shows you don't give up on a child for someone like that," said Kent, who does not have Down Syndrome.

Kent said that she likes discussing the abortion issue.

For her freshman year research project, she chose to examine alternatives to abortion. She proposed keeping the baby, adoption and encouraged abstinence until marriage as other options.