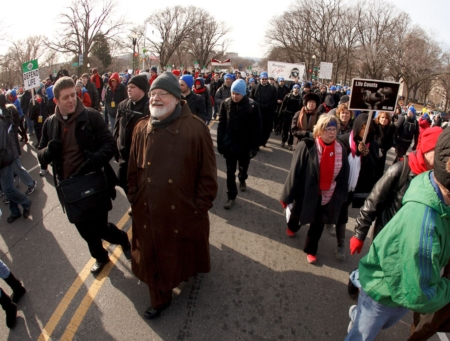 WASHINGTON, D.C. -- Hundreds of youth and young adults from the Archdiocese of Boston participated in the archdiocese's annual Pilgrimage for Life, united with other American youth in a common cause -- their belief that abortion is wrong.

"I think it's just a great opportunity to meet other people who share the same beliefs and the same cause," said Kathryn Rogers, 16, a junior at Presentation of Mary Academy in Methuen, who attended the March for Life for the first time this year. "It's just a great life experience."

Rogers and a nearly 300 combined middle and high school youth and young adults journeyed to Washington, D.C. to join in the March for Life, which this year was held on Jan. 24. Local young pilgrims also participated in Masses, Holy Hours, rallies, and tours of patriotic landmarks.

"I really liked the experience because I felt a strong connection with God," said D.J. Jolicoeur, 14, an eighth grader at Blessed Sacrament School in Walpole. This year was Jolicoeur's second pilgrimage.

Boston's high school youth and young adults departed on buses around 6 a.m. Jan. 23, arriving at the jam-packed basilica for an evening Mass.

The following morning, Jan. 24, the young pilgrims had Mass with Cardinal Seán P. O'Malley at Sacred Heart Church in Washington.

After the Mass, the pilgrims went to the 38th annual March for Life.

The high schoolers concluded Jan. 24 with a holy hour at St. Mary Parish in Landover Hills, Md., which included Eucharistic adoration and confession, a talk by Chris Carmody, theology teacher and campus minister at St. Mary High School in Lynn, and praise and worship music by Jon Niven.

Jan. 25 was the final day of pilgrimage for the high school youth, and on that day, they had a morning Mass with Cardinal O'Malley at Catholic University of America, and toured historic landmarks such as the Holocaust Museum and Arlington National Cemetery.

Middle school youth, however, took a slightly different track. They arrived in Washington Jan. 22, one day before the high school and young adult pilgrims came. Middle schoolers attended an EDGE youth rally that night, and spent Jan. 23 touring historic monuments and attending another youth rally that evening. Following the march they returned to the hotel for a movie and discussion.

Brenna Gosselin, 17, of St. Francis Parish in Dracut, reflected on the unifying experience of the trip.

"It's so cool to see us unite for one cause," she said.

Accompanied by one priest on each bus, the young pilgrims prayed the rosary and watched movies with a pro-life message on the buses to Washington.

Thousands of youth and young adults from across the United States began their time in Washington for a Mass at the national basilica, joining hundreds of seminarians, deacons and priests, scores of bishops and four cardinals -- among them Cardinal O'Malley. The homilist was Cardinal Daniel DiNardo, Archbishop of Galveston-Houston and head of the United States Conference of Catholic Bishops' Pro-Life Committee.

Last year, James Reynolds, now 21, also of St. Francis in Dracut, was forced to watch the Mass on closed-circuit television downstairs in the basilica. He said that he could not sit close enough to a television to hear, and ended up going outside and praying the Rosary.

This year, however, he was able to see the Mass in person.

"It was awe-inspiring," he said.

The pilgrims began Jan. 24, the day of the march, with a Mass at Sacred Heart Church with Cardinal O'Malley. He had served at the Capuchin-run parish as a priest about 40 years ago.

In remarks made after Communion, Cardinal O'Malley discussed one important aspect of the march.

"It gives all our young people a chance to realize you are not alone in the Church, in Christ's family," he said.

Father Dan Hennessey, director of the archdiocese's vocations office, followed Cardinal O'Malley, and encouraged the youth to be generous with God in whatever vocation he calls them.

"As you've been generous with your time, your energy and your life by coming here, present that generosity to God," he said.

Some carried signs, some chanted various pro-life slogans, some prayed, and others simply supported the cause through their presence.

Ken Costa, 14, of St. Joseph Parish in Wakefield, said the march was "an amazing experience," due to "all these people who stand for the same thing gathering to protest."

When the pilgrims reached the U.S. Supreme Court building, the conclusion of the march, they gathered in prayer led by Father Matt Williams, director of the archdiocese's Office for the New Evangelization of Youth and Young Adults.

In the evening, high school youth participated in a Holy Hour at nearby St. Mary of the Hills Parish in Landover Hills, Md., where they shared their experiences of the trip and heard a talk by Chris Carmody, theology teacher and campus minster at St. Mary High School in Lynn.

Carmody shared ways young people can promote a pro-life ethos in their everyday lives beyond publicly demonstrating as they did earlier in the day.

Kathy Stebbins, youth ministry coordinator for the archdiocese, said a goal of the trip is to provide the youth a way to live their Catholic faith and see others doing the same.

Reflecting on this year's pilgrimage, Father Williams expressed great hope for the future given the participation of so many local and national youth.

Speaking with The Pilot as the high schoolers were spread throughout the Church in silent prayer during their Holy Hour, he extended his arm out with palm upward and said, "They're out there -- the great hope of our Church."

Corina Pinto, 17, a senior at St. Mary High School, was on her second Pilgrimage for Life this year and said she plans to continue attending the march in years to come.

"The experience the first time was amazing," she said. "I just need to continue doing this for a long time until the (Roe v. Wade) decision is changed."