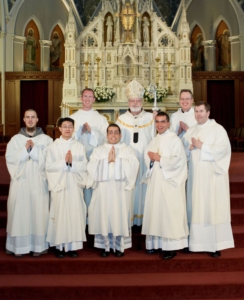 SOUTH END -- Seven local seminarians were ordained to the transitional diaconate Jan. 22 -- the last step on the road to the priesthood.

Cardinal Seán P. O'Malley ordained seven men to serve the faithful of the Archdiocese of Boston as transitional deacons at a Saturday morning Mass at the Cathedral of the Holy Cross attended by around 1,500 people.

As part of the ordination rite, the men made their promises of celibacy and obedience and are now counted among the ranks of the clergy. They are slated to be ordained to the priesthood May 21 at the Cathedral of the Holy Cross.

"A lot of time has been invested, both by myself and the seminary, to develop what God has asked of me," said newly-ordained Deacon Michael Farrell, a student at St. John Seminary. "It's a moment of joy and a hint of what will happen in May."

Brother Cannon is an Oblate of the Virgin Mary, of St. Clement Eucharistic Shrine in Boston, and Brother Hurley is a Franciscan of the Primitive Observance.

Following the ordination ceremony, the men reflected on becoming deacons as well as their upcoming roles.

"It's amazing," said Deacon Suarez, who will be serving at Immaculate Conception Parish in Marlborough. "It's really humbling just to recognize the call to serve these people and to recognize the great company you are in with your brother priests and brother deacons. It's a great joy."

Deacon Murphy's assignment will be at St. Thomas Aquinas Parish in Bridgewater.

He said he is looking forward to preaching, noting how it will prepare him for the priesthood and allow him to put the homiletic and public speaking training he has received at St. John Seminary into practice.

"I also have a desire to teach people more about Christ," he added. "Preaching is a good way to do that."

Deacon Farrell, whose assignment will be at St. Mary of the Annunciation Parish in Cambridge, also discussed the importance of preaching.

"That's the call we receive primarily as deacons -- to preach the Gospel so people will come to know our Lord Jesus Christ better and grow closer to him," Deacon Farrell said.

In his ordination homily Cardinal O'Malley discussed the importance of preaching, one of the ministries of the deacon, saying the deacons are "messengers of the Gospel."

He also encouraged the ordinandi to live their calling enthusiastically during their ministry.

"The Church exists to evangelize and the deacon must have a passion for his vocation -- to bring the message of God's good news," Cardinal O'Malley said.

As part of the ordination ceremony, deacons receive a Book of the Gospels and are instructed by the ordaining bishop to proclaim the Good News.

"Receive the Gospel of Christ, whose herald you have become. Believe what you read. Teach what you believe. Practice what you teach," the bishop states as he presents the Gospels.

The ordination ceremony is the final step for the men as they move towards priesthood, but Deacon Farrell also noted that becoming a deacon is a continuing of God's will being revealed in his life.

"It's the continuing of God's guidance," he said. "God's just revealing his will to me. It brings me great joy to serve him bringing his will to the people."