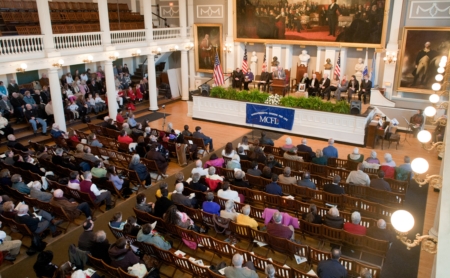 Former Ambassador to the Vatican Ray Flynn delivers his keynote address at the Massachusetts Citizens for Life's Assembly for Life Jan. 16. The pro-life rally is held in late January each year to mark anniversary of the Supreme Court's 1973 Roe vs. Wade decision. Pilot photo/ Jim Lockwood

BOSTON -- This year's Massachusetts Citizens for Life (MCFL) Assembly for Life gave local pro-lifers a chance to reflect on heroes of the pro-life movement.

The keynote address was given by former Vatican ambassador and Boston mayor Ray Flynn.

Rev. R. Gary Heikkila, of the Elm Street Congregational Church in Fitchburg, led a tribute to physician and pro-life activist Dr. Mildred Jefferson, and Deacon Frank McHugh, of Most Holy Redeemer Parish in East Boston, discussed upcoming Holy Hours for Life in the Archdiocese of Boston.

Music for the assembly was provided by the Treblemakers -- the a capella choir from the Montrose School -- as well as Eric and Pat Anthony and Helen Cross. Jeanine Graf, a longtime radio personality, was the emcee.

Anne Fox, president of MCFL, said that the assembly motivates attendees to advocate for the pro-life cause.

The event has been held every year since 1974, one year after the Supreme Court's Roe vs. Wade decision that lifted state restrictions on abortion.

Rev. Heikkila spoke about Dr. Jefferson, who died in 2010 at age 84, at the beginning of the assembly.

"She had an immense vitality that did not fail her," Rev. Heikkila said. "Mildred literally enriched our lives. She was the original life enhancer. We are all richer for the joy of her presence."

Dr. Jefferson, the first African-American woman to graduate from Harvard Medical School, was the founder of the National Right to Life Committee and was on the boards of numerous pro-life organizations.

"At our Mass. Citizens meetings since Dr. Jefferson died, there has been a gap," Fox said.

Fox also discussed MCFL's plans for the upcoming year, including an effort to repeal health care legislation signed into law by President Barack Obama in 2009. She also said pro-lifers made gains in national and state legislative races, noting that the United States House of Representatives is comprised of a majority of pro-life members.

"Things are really looking quite good right now," she said.

He said that all movements must have heroes that can be admired and of whom activists can speak with pride.

Flynn discussed his personal heroes, the late Pope John Paul II and Blessed Mother Teresa, noting their compassion for the poor. He praised the late pontiff for his "commitment to the common good."

"They were the voice of the poor, the weak and the voiceless," he said. "We must all try and follow in that great tradition."

"I'm making the point we need pro-life leaders to be elevated to people we can look up to and talk about," Flynn continued.

He cited Dr. Jefferson and other local and national figures he regards as heroes to the pro-life movement.

He also mentioned the Hanafin family of Burlington, who were recognized as MCFL's Family of the Year at the assembly.

Rose and Charlie Hanafin started the Burlington MCFL chapter in 1975. Daughter Kathy Coluci, along with her nephew Matt Hanafin, restarted the chapter in 2009. Matt Hanifan also started a pro-life group at Merrimack College and serves on the MCFL Board of Directors. In 2010, Coluci's daughter Kayla started the pro-life club at Burlington High School, the first at a public high school in the state. Another Hanafin daughter, Jean Armano, chairs MCFL's Lawrence chapter.

Flynn's remarks drew praise from those who were in attendance.

"Everybody in the pro-life movement is a hero," said Jack Welch, of St. Gerard Majella Parish in Canton, who attended the event for the first time this year. "They need to be admired in what they do going against society. Instead of promoting a culture of death, they promote a culture of life."

"Our culture needs to know what a true hero is -- not a celebrity," said Mazzarella.

Deacon Frank McHugh spoke of the Holy Hours for Life that Boston Deacons for Life are leading in 177 parishes of the Archdiocese of Boston Jan. 23. The aim of these Holy Hours is to support marchers in the annual Washington, D.C. March for Life, which this year is on Jan. 24, as well as pray for the pro-life cause.

Muriel Ostrowski, of Heartbeat Pregnancy Help Center, was presented the Flatley Trophy for her work in generating the most walkers for MCFL's annual Respect Life Walk to Aid Mothers and Children, held each October at the Boston Common.

Speaking to The Pilot after the assembly, Fox compared the event to making New Year's resolutions.

"It's our time to make resolutions to improve the culture of life," Fox said. "We acknowledge the (Supreme Court) decision and then make our resolution to do something about it -- a lot about it."