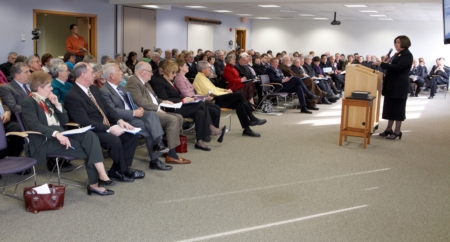 'Last Thursday (Jan. 6), we hosted a Celebration of Catholic Education that brought together almost 200 pastors and principals from our Catholic schools around the archdiocese. The meeting was led by our Secretary of Education Mary Grassa O'Neill.' Pilotphoto/CardinalSeansBlog.org

This morning we received the wonderful news that Father Chris Coyne of St. Margaret Mary Parish in Westwood has been named auxiliary bishop of the Archdiocese of Indianapolis. I would like to share with you the statement I issued this morning following the announcement:

"It is with great joy that I received the news that our Holy Father, Pope Benedict XVI has named Father Christopher J. Coyne as auxiliary bishop of the Archdiocese of Indianapolis, Indiana. Bishop-elect Coyne has served as a Priest of the Archdiocese of Boston for almost twenty-five years, and during this time he has continued to demonstrate tremendous skill as a pastor and leader within the Archdiocese. Archbishop Daniel M. Buechlein is indeed blessed to receive one of Boston's finest priests.

Bishop-elect Coyne has served the needs of the Archdiocese of Boston in many ways: as professor of Sacred Liturgy and Homiletics, as well as director of the Pre-Theology Program at St. John's Seminary, Brighton; as Archdiocesan Director for the Office of Worship as well as Cabinet Secretary for Communications and Archdiocesan Spokesman for the Archdiocese of Boston. And most recently as Pastor of St. Margaret Mary Parish in Westwood, Bishop-elect Coyne has continued to demonstrate the skills and abilities that led our Holy Father to recognize in him a good candidate for the office of Bishop.

Last Thursday (Jan. 6), we hosted a Celebration of Catholic Education that brought together almost 200 pastors and principals from our Catholic schools around the archdiocese. The meeting was led by our Secretary of Education Mary Grassa O'Neill.

The keynote address was given by Father J. Bryan Hehir, who is our Secretary for Health and Social Services. He gave an outstanding reflection on Catholic education and its role in shaping Catholic identity.

Also during the meeting a number of schools were recognized who were celebrating significant anniversaries. Arlington Catholic High School celebrated its 50th anniversary this year. We presented a certificate to Principal Stephen Biagioni. St. Brendan School in Dorchester, St. Michael's in North Andover and St. Therese in West Roxbury were all recognized for their 60th anniversaries. Central Catholic High School in Lawrence celebrated its 75th anniversary this year, and we were joined at the gathering by Brother Tom Long, the school's president, and Doreen Keller, who is in her first year as the school's principal. Last, but certainly not least, Mt. St. Joseph Academy of Brighton celebrates its 125th anniversary this year. Kathleen Fraser is the principal there It was a very well-attended and hopeful meeting.

Second trip of my Apostolic Visitation

(Saturday, Jan. 8) I departed to Ireland for the second trip of my Apostolic Visitation. We had an opportunity to meet with about 60 people during our visit. I was supposed to fly back Wednesday but the flight was cancelled due to the blizzard here. So, on the last day of my trip I went to visit the Capuchins on Church Street who have a ministry to the homeless and to the poor. They serve about 1,000 meals per day and have a clinic of services there for the homeless and indigent. ...It just goes to show that God has a plan in everything, even blizzards!