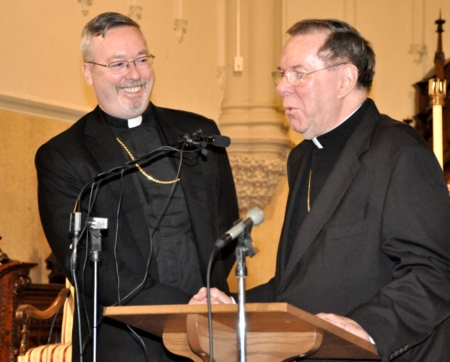 Pope Benedict XVI named Father Christopher J. Coyne, the pastor of St. Margaret Mary Parish in Westwood, titular bishop of Mopta and auxiliary bishop of the Archdiocese of Indianapolis Feb. 14. The move of naming a priest of one archdiocese as auxiliary bishop of another was seen as unusual, but is not an unheard of situation.

Father Coyne has been serving happily as pastor of the suburban Boston parish since his appointment to the parish on May 22, 2006. Prior to his appointment as pastor, he had served as the spokesman of the archdiocese from 2002 to 2005. He also served as a faculty member of St. John's Seminary while being spokesman.

In 1944, the diocese was elevated to an archdiocese and Bishop Ritter became an archbishop. He was appointed to the St. Louis Archdiocese in 1946 and became a cardinal in 1961. Cardinal Ritter died in 1967.

"I am grateful to the Holy Father. I consider this a late Christmas gift," Indianapolis Archbishop Daniel M. Buechlein said at a Feb. 14 news conference in Indiana.

"As most of you know, I've had some health issues in recent years, including a bout with Hodgkin's lymphoma in 2008 and that has curtailed some of my activities. Bishop-elect Coyne is a young 52. I'm 72. I'm looking forward to the energy he will bring to helping us carry out our mission," Archbishop Buechlein said.

The newly named auxiliary said he was grateful for his appointment but said he has a lot to learn about central and southern Indiana and about being a bishop.

"I need to learn how to be a bishop, a good bishop for the faithful and the clergy of this great archdiocese," he said. "I pledge myself today to the service of God's people here in (the archdiocese) and I hope over time to become a true son of Indiana. Please know that my prayers are for you and I ask only the same in return."

At the press conference, Archbishop Beuchlein also announced that Bishop-elect Coyne would become the vicar general of the Hoosier state archdiocese.

A Woburn native where he was born on June 17, 1958 he attended local schools and graduated from Woburn High School before going on to complete his undergraduate degree at U Mass - Lowell. He is an alumnus of St. John's Seminary and Cardinal Bernard Law ordained him to the priesthood at Holy Cross Cathedral ten days before his 28th birthday, on June 7, 1986. He celebrated his first Mass at St. Barbara Church, Woburn on the following day.

He was assigned as parochial vicar to St. Mary of the Hills Parish, Milton with the well known and highly respected Msgr. John Dillon Day as his first pastor. Just three years later he was tapped for graduate studies in Rome, sent to the Pontifical Liturgical Institute at San Anselmo, the premier liturgical faculty in Rome and perhaps, the world. During his years there he received both the licentiate and doctorate in Sacred Liturgy.

Returning to the archdiocese he was appointed to the faculty of St. John's Seminary serving as professor of liturgy from 1995-2005 and assuming the further responsibility of Director of the Office for Worship (1999-2002).

He served for six months as pastor of Our Lady Help of Christians parish in Newton before being named to the Westwood parish. His parishioners lauded him for his enormous capacity to listen, yet also for his ability to act when necessary. He communicates regularly with them and others through his recently renamed blog "Let Us Walk Together: Thoughts of a Catholic Bishop." A recent post promises he will continue blogging as a bishop.

Bishop-elect Coyne also will not be the first Bostonian to serve as bishop in Indiana. Bishop John D'Arcy was auxiliary in Boston before serving as bishop of the northern Indiana diocese of Fort Wayne-South Bend from 1985-2009.

Archbishop Beuchlein announced that he will ordain Bishop-elect Coyne to the episcopacy in Indianapolis' historic St. John the Evangelist Church, the first cathedral of the archdiocese, on March 2. The new bishop will reside at the parish's rectory when he takes up his new responsibilities in Indiana.