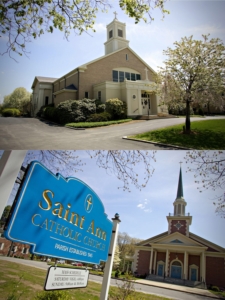 The Wayland parishes of St. Zepherin and St. Ann will merge to become the Parish of the Good Shepherd Jan. 1. Pilot file photos

BRAINTREE -- Several parishes in the Archdiocese of Boston have merged in recent years, but in Wayland the process is taking a slightly different tack.

Officials from both parishes in the town saw that consolidating the parishes would be more feasible in the long run, so they have approached the archdiocese and asked to be merged into a single parish.

St. Ann and St. Zepherin Parishes, both in Wayland, have announced that they have agreed to merge. Beginning Jan. 1, the parishes will officially consolidate into the Parish of the Good Shepherd.

"This is an exciting time for our parish communities," said Father James Laughlin, who will serve as Good Shepherd's pastor. "We have been working hard in coming together and getting to know one another for the last two years."

Temporarily, the new parish will use two worship sites -- St. Ann and St. Zepherin's Churches. However, Father Laughlin said that the parish is expected to operate out of one church in the future. He also said an already-formed real estate team is eying potential locations for a new church.

The parish will be served by one consolidated staff.

"It's just going to be a lot smoother once Jan. 1 hits," Father Laughlin said.

"Wayland is not as densely populated as other parts of the archdiocese," he said.

Father Laughlin had been serving as pastor of both Wayland parishes since July 2008. He was named pastor of St. Ann's in 2006 and became pastor of St. Zepherin's in 2008.

"It immediately became clear that the model of one pastor for two parishes would not be sustainable in the long run," Father Laughlin said.

He said the two separate parishes had "two of everything except a priest."

Father Laughlin said that when he became pastor of both parishes, he implemented a non-overlapping Mass schedule that included two weekend Masses at each church.

"Right from the beginning there was a lot of interchange of people going to the other church," Father Laughlin said.

For roughly the last 18 months, he said, the pastoral councils of both parishes have been meeting jointly. The merger process also included a public forum for parishioners to discuss consolidation and the future of the Catholic Church in Wayland.

Father Laughlin said having one worship site is beneficial.

"Financially, it makes a great deal of sense because the resources from whatever property is sold stays within the parish -- both to improve the final site of the parish and form the basis for doing greater outreach," he said.

While the merger is formally effective Jan. 1, Father Laughlin said that in reality, the two Wayland parishes have been functioning as one for the last 18 months.

"This last official creation of a new parish is an important step in the community coming together," he said.

Father Laughlin said the parish's new name, Parish of the Good Shepherd, was chosen by Cardinal Seán P. O'Malley. Parishioners were invited to suggest potential names for the parish, and the top four choices were submitted to the archdiocese.

An image of the Good Shepherd is depicted on windows in both St. Ann's and St. Zepherin's churches.

"As we form a new parish, we're taking something that was an important symbol in our former parishes," Father Laughlin said.

Throughout the merging process, Father Laughlin collaborated with the Archdiocese of Boston's pastoral planning office.

"I think it reinforced our commitment to good information, good communication, working collaboratively with the laity and our pastors and recognizing the role the archdiocese plays in supportive services," he said.

Father Couturier said he met with Wayland parish officials and explained why it was important to focus on "mission and developing the new community" when considering potential parish mergers.

"That's a much more positive approach than focusing on what's happening to a building," Father Couturier said. "They kept their eyes on the bigger picture."