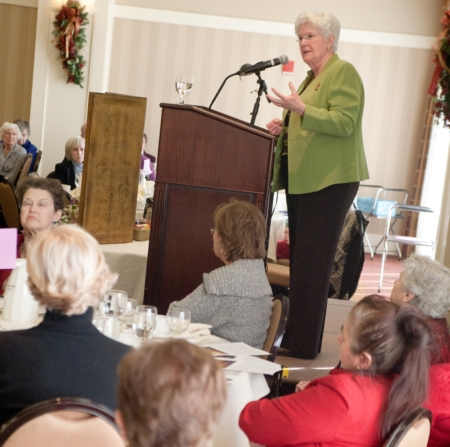 NORWOOD -- Amidst the hustle and bustle of the Christmas season, this year's annual Women Affirming Life Mass and Breakfast, held just one week before the holiday, allowed attendees to pause and reflect on the spiritual meaning of the holiday.

"I thought it was a very nice way to remember our spirituality in the midst of the Advent season," said Elisa Riedl, a parishioner at Our Lady of Fatima Parish in Sudbury.

A record sellout crowd of over 300 Catholic women, and a few men, attended the annual Women Affirming Life Mass and Breakfast this year at the Sheraton Four Points Norwood. The morning began with a Mass offered by Cardinal Seán P. O'Malley and concluded with a breakfast highlighted by a keynote address by Mary Ann McLaughlin, co-director of the Archdiocese of Boston's Office for Worship and Spiritual Life.

McLaughlin's keynote address was entitled "Celebrating the GIFT of the Incarnation: What Does Christmas Mean to Us?"

In her keynote, McLaughlin reflected on the meaning of the Incarnation; God becoming man through his son which Christians celebrate at Christmas.

"The Incarnation is at the heart of who we are because we believe over 2,000 years ago, God entered into the human condition and God, Jesus, was with us at this time in history," she said.

Early in her talk, breakfast attendees were given a handout containing Henry Osawa Tanner's painting "The Annunciation," and Luke's accounts of the Annunciation and the news that Mary's cousin, Elizabeth, was also pregnant.

McLaughlin used the painting to speak of Mary's presumed emotions and feelings when an angel told her she was pregnant with God's child, how Mary was present to Elizabeth and Zechariah during their pregnancies and what their examples can teach today's Catholics.

"I think most of us spend our lives trying to be someone -- the best mother, the best teacher, the best friend -- at this time in their life," McLaughlin said. "The reality is each of us is made for God."

McLaughlin encouraged breakfast attendees to use the gifts God gave them for the purposes of his plan for communion.

McLaughlin reminded attendees that through the Incarnation God became real for the human family, and that "angels of the Annunciation" are in the world today.

"It's helpful for me to know there are angels of the Annunciation that are visiting people in my life and yours, and God, in Christ, is laboring in real terms, day in and day out," she said.

She concluded her talk by reminding attendees that humans are made to be united with God, and that humans must believe they can make a choice to accept what God gives them.

"It's a freedom from our own ideas of how life ought to be, and (is) this wonderful freedom for what God has in store for us here and now today, and for what is in eternity," McLaughlin said.

Cardinal O'Malley's homily began by reminding those in attendance about the spiritual dimension of the weeks leading up to Christmas, and went on to discuss the example of Mary and the connection between the Incarnation and the pro-life message.

"Advent is a very special and sacred time to help us prepare for Christmas so that we don't get so caught up in the consumerism, sentimentality, busyness and rush of so many shopping days that we don't lose sight of what Advent is," he said.

The cardinal then discussed Mary's role in the Incarnation, and her answering God's call.

"Mary is the first Catholic woman affirming life by saying yes to God, yes to life, yes to love and yes to her mission," Cardinal O'Malley said.

Cardinal O'Malley also discussed the importance of committing to being pro-life and sharing that belief with others, saying that a "commitment to the Gospel of Life is central to a life of discipleship."

He said pro-lifers are in a "spiritual warfare" and called on attendees to "convert hearts" before aiming to push for legislative change.

Cardinal O'Malley also said there is a correlation between dwindling Mass attendance and a societal drift away from a culture of life. He called on attendees to invite lapsed Catholics back to Church.

"The great problem that we face is getting people back to the Sunday Mass obligation," he also said. "If we do that we are going to see more vocations, more marriages, and a greater percentage of people who are willing to stand up for the Gospel of Life."

Cardinal O'Malley said that in this regard, today's Catholics have an obligation to evangelize.

"Our mission is to go out to announce the good news and to invite our brothers and sisters back to the manger to worship our God, and if we do that the light that shone when Mary said yes will be brighter and brighter," Cardinal O'Malley also said.

Marianne Luthin, director of the Archdiocese of Boston's Respect Life Office, said the annual breakfast allows attendees to think about the meaning of Advent amidst other preparations, such as shopping, for Christmas.

"Part of what I think is happening is there is a sense we lose Advent every year. We get so busy," Luthin said. "It resonated with people to do something spiritual."

"It's just a wonderful opportunity to take a break from the busyness we get trapped in during the season and focus on what's really important," said Gray.