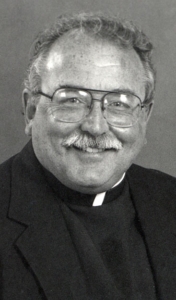 Father Marc A. Piche, who since June 2, 2003 has been the pastor of Immaculate Conception Parish in Newburyport, died on Dec. 13 in Avon. He was 68 years old.

A native of Brockton where he was born on June 6, 1942 one of the four sons of the late Marcel and Noella (Landry) Piche, he was raised in Sacred Heart (French) parish in the Boxer City and attended high school and college with the Assumptionists at their Montreal campus.

He came back to Boston and enrolled in the archdiocesan seminaries at Brighton and on finishing his seminary education he was ordained to the priesthood at Holy Cross Cathedral by Richard Cardinal Cushing on May 29, 1968. His first assignment following ordination was as an assistant at Medford's St. Francis of Assisi Parish. In 1969 he was named an assistant at St. Peter Parish in Plymouth, serving there until 1974 when he moved to Salem's St. Joseph (French) parish.

For the next seven years he served the busy city parish with the additional responsibilities of Regional Director of Liturgy for the Lynn Region. His interest in liturgy was given an academic backing when he went on a self funded period of study to Providence College. During this time he lived first in residence at St. Mary Rectory, Foxborough and then as an associate at St. Mary Parish, Wrentham. From 1982 until he moved to Stoneham as parochial vicar, he served also as episcopal vicar of the Natick vicariate of the Brockton Region of the archdiocese.

After a bit more than year in Stoneham, he was named administrator of the two parishes in Groton. The city born priest had come to love the mountains and the more rural parts of the archdiocese and so Groton fit the bill for him nicely. Just another year passed when he was named pastor of Haverhill's Sacred Hearts Parish which served the city's Bradford section. This would be the single longest of his priestly assignments remaining there until June 2, 2003 when he moved closer to the ocean in Newburyport.

In each assignment he had the reputation of being very much involved in the lives of his people and active in the local community. The effect of his 42 years of priestly service was echoed and re-echoed by present and former parishioners, and his head for steady leadership in the parish and attention to all parish activities won praise as tributes really poured in following his death.

He had for most of his life been vigorous and active; but he had health problems which attacked his liver and he had until a few months ago been on the "transplant waiting list."

Cardinal O'Malley and archdiocesan vicar general, Father Richard Erikson had been present along with other local priests for the Reception of Father Piche's Body prior to the lying in state at the church on Dec. 17.

Father Piche is survived by his three brothers: Roger, Lake Suzie, Fla.; Joseph, Plymouth and Andre, Avon. Interment was to be at St. Mary Cemetery, Newburyport.