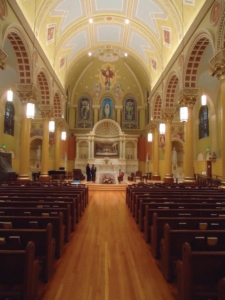 Keith Crowley has been named principal of St. John's Prep in Danvers, and will begin his duties on July 1, 2011. He succeeds Edward Hardiman, who will become headmaster of the school, also on July 1.

In addition, Crowley has been an adjunct professor of science at Dean College in Franklin since 2003. He also serves on the faculty of the Summer Institute at Loyola University's Center for Catholic School Effectiveness in Chicago.

Norris to chair Regis College board

Donna Norris has been elected chair of the Regis College Board of Trustees, effective immediately, the school recently announced.

She has been a member of the Regis College Board since 2008 and will begin her second term in Jan. 2011.

She is currently editing a book on the lives of women psychiatrists.

The Sisters of St. Joseph hosted a benefit concert at their motherhouse in Brighton Dec. 12 for the creation of a Safe House for victims of human trafficking. The concert was performed by Father Robert Congdon, pastor of St. Mary Parish in Brookline, on keyboard, Becki Waters (soloist), Paul Mattal (cellist) and Marco Florez (keyboard). The musicians donated their time, and performed several original works.

St. Cecilia Church in the Back Bay reopened Dec. 12 after recently completing a major interior renovation. The church closed after Easter for a major overhaul that included new flooring, pews, painting and a redesigned sanctuary and entrance. Among delighted parishioners attending the 11 a.m. Mass that day were the project's numerous contractors, painters, and construction workers. The renovation continues with restoration of the attached rectory and redesign of the lower church into a parish center complex.

The parish will celebrate its 125th anniversary in 2013.