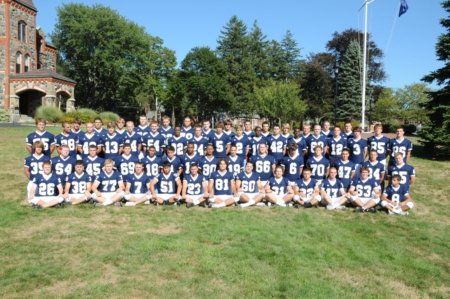 Playing at home on Thanksgiving eve, St. Mary's defeated their city rival 40-6. One senior running back having a great night was Nick Day, scoring three touchdowns. Led by head coach Matt Durgin, St. Mary ends at 10-1 and ties the school's record for wins in a regular season. Lynn Tech ends at 1-9.

Playing at home in Brockton on Thanksgiving eve with an undefeated season, Spellman trounced their rival, Archbishop Williams by a score of 42-0. Senior running back Blaise Branch scored four touchdowns and ends the season as the leading EMass scorer with 36 touchdowns. The Bishops, led by head coach Bill Kinsherf, end the season at 2-8.

Spellman made an appearance in a Division 3A play-off game on Wednesday, Dec. 1 at Reading High School and defeated Hamilton-Wenham 28-16. The win advanced the Cardinals to the Division 3A superbowl on Saturday, Dec. 4 at Gillette Stadium against Holliston. Spellman, led by head coach Ron St. George, ended their spectacular season losing the game 21-7 and with a record of 12-1.

Playing at home on Thanksgiving morning, the BC High Eagles prevailed with a 29-27 win that was sealed in a fourth period that began with both teams tied at 14-14. The Eagles, led by head coach Jon Bartlett, end at 6-4 and have a six year winning streak with their Thanksgiving Day rival. The turkey day win allowed the Eagles to have a three team share in the Catholic Conference Title. The CM Knights, led by head coach Alex Campea, end at 5-5.

The Eagles from Danvers flew over to Westwood on Thanksgiving morning to take on the Xaverian Hawks and prevailed with a 21-12 win and Catholic Conference Title champs. Xaverian, led by head coach Charlie Stevenson, would have liked to repeat as Division 1 superbowl champs with an undefeated season but end the season with a respectable record of 8-3. Both teams ended with a three team share for the Catholic Conference Title.

The turkey day win allowed Prep to make their first play-off appearance since 2003. The Eagles made an appearance in a Division 1 semi-playoff game on Wednesday, Dec. 1 at Taunton High School and defeated New Bedford by a score of 35-7. The win allowed the Eagles to advance to the Division 1 superbowl at Gillette Stadium on Dec. 4 against Everett. Despite a valiant effort, the Eagles lost to the undefeated Crimson Tide by a score of 31-7. Led by head coach Jim O'Leary, Prep ends at 8-5. Everett ends at 12-0.

Playing at home, the Andover Golden Warriors celebrated a Thanksgiving Day win over the Central Catholic Red Raiders by a score of 19-7. The victory allowed Andover to capture the Merrimac Valley Large Conference Title and make a play-off appearance for the first time since 1975. In a Division 1 semi-playoff game on Nov. 30, Andover took on Everett, losing 21-0 and ends the season at 8-4. Despite the turkey day loss, Central Catholic, led by Chuck Adampopulos, had a great season, ending at 7-4.

Playing at Chelsea High School, the Pope John Tigers defeated their Thanksgiving rival, Lowell Catholic 20-0. The win enabled the Tigers to capture their first Catholic Central small title and play-off berth. The Tigers made an appearance in a Division 4A semi-playoff against Northeast Regional High School on Tuesday, Nov. 30 and lost the battle by a score of 42-0. Both teams had great seasons. Lowell Catholic, led by head coach Tim Walsh, ends at 8-2. Pope John, led by Brian Vaughn in his first year, ends at 8-3.

Playing at home in Reading, the Austin Prep cougars defeated Fenwick 38-8. Two cougars who had a great time were Adam Frasor (two touchdowns) and Joe Diaz (three touchdowns). Led by head coach Bill Maradei, Austin Prep ends at 6-5. The Fenwick Crusaders, led by headcoach Dave Woods, end at 3-8. Congratulations to quarterback Bret Kidik who threw his 23rd touchdown pass of the season and to Ryan Lipka who holds the state record of 115 catches.

Playing in Boston, the Cathedral Panthers took on their rival, the Marian Mustangs and prevailed with a 28-12 win. Always speedy on the field, David Cinelli had a great game, rushing for a touchdown, catching a touchdown pass and scoring on a punt return. Cathedral, led by head coach Michael Pittman, ends at 5-6. Lead by head coach Gene Robinson in his first year, Marian ends at 2-9.

Playing at home in Somerville, the Highlanders welcomed their neighbor, the Matignon Warriors and prevailed with a 34-6 win. Both teams end with a record of 4-6. Matignon was led by head coach Neil Valeriani.

Arlington High defeated their neighboring rival, the AC Cougars by a score of 42-14. Rebuilding after last year's great season (9-2) and loss of eight all stars, Arlington Catholic, led by head coach Serge Clivio, ends at 2-9. Somerville ends at 4-6.