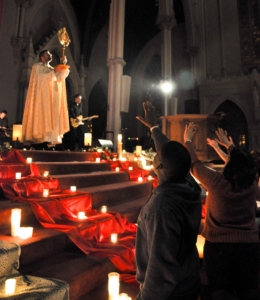 Father Matt Williams, the head Office for the New Evangelization of Youth and Young Adults, leads eucharistic adoration Dec. 3 in the Cathedral of the Holy Cross on the final night of the 2010 ''God of This City Tour.'' Pilot photo/ Justin Bell

SOUTH END -- In its second year, the ''God of This City Tour'' has brought thousands of youth and young adults to different locations throughout the archdiocese to be engaged in prayer and devotion as the Church prepares for Christmas.

The five-day event is sponsored by the Archdiocese of Boston's Office for the New Evangelization of Youth and Young Adults (ONE) and LIFT Ministries.

As ONE Director Father Matt Williams said, the tour aims to reach young people "through different ways of prayer, engaging the young people in silence, in dynamic music, in the preached word of God." There is also an opportunity for Eucharistic adoration and the Sacrament of Confession.

"You're hitting them from all different types of angles and bringing them in an encounter with Christ, the living bread of life," he added.

The ''God of This City Tour'' is held five consecutive nights, on one week during Advent, in various locations throughout the archdiocese's five regions. The tour offers a different speaker each night, and music is provided by Jon Niven and his band.

This year, the tour kicked off Nov. 30 at St. Mary Parish in Lynn, with Father Williams as the main speaker. The following day, God of This City was held at Holy Family Parish in Duxbury, with Sister Olga Yaqob as speaker. On Dec. 1, the tour continued at St. Michael Parish in North Andover, where Father Marc Bishop was the featured speaker. Brett St. Gelais was the speaker Dec. 2 at St. Mary Parish in Franklin. The tour concluded at the Cathedral of the Holy Cross with Cardinal Seán P. O'Malley as the main speaker on Dec. 3.

The final night of the tour at the cathedral began with the evening Liturgy of the Hours, followed by praise and worship music, and a choir specifically formed for the Dec. 3 closing night event made up of volunteers from Boston and nearby dioceses.

Cardinal O'Malley, in his remarks, reminded the youth and young adults of the importance of following God's will as the Blessed Mother did, as well as the power of prayer in the lives of Catholics.

"At that moment of the Annunciation, God was knocking on the door of humanity, and Mary, in our name, was opening the door by saying yes to God," Cardinal O'Malley said. "God became one of us because Mary said yes."

He also said that without prayer, God's will cannot be realized, adding that the faith behind the prayer is more important than the words used.

"If we trust our loving God and we know that he is our father, we'll want to put our life is his hands," Cardinal O'Malley said. "We'll want to say yes to God's will."

Following the event, several attendees reflected on the aspects of the evening that impacted them.

Austin Wells, 16, of St. Francis Parish in Dracut, said he enjoyed going to confession at the Dec. 3 God of This City event.

Chris Bowler, 24, a parishioner at St. Joseph Parish in Wakefield, said that witnessing the entire assembly adoring the Blessed Sacrament was his favorite part because of "believing in Jesus and being with a lot of other people believing the same thing."

Meghan Richard, 19, of St. Michael Parish in North Andover, attends other LIFT events in the area, and says her favorite part of the gatherings is also eucharistic adoration.

"Every time it's the best part for me," she said. "It's done so well and so reverently."

"It's so cool to be able to use the cathedral for something like this," she added.