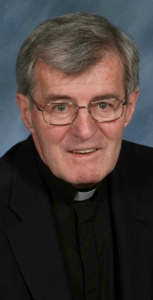 Father Richard L. Harrington, a native of Arlington where he was born on Feb. 6, 1939 died at Boston's residence for Senior Priests, Regina Cleri on Dec. 3. He was 71 years old.

Though born in Arlington, he grew up in Waltham where he attended his home parish's schools: St. Mary Grammar, taught by the Sisters of Notre Dame and Boys High School taught by the Christian Brothers. He was graduated from the high school in 1956.

He was one of the seven children, six sons and one daughter of the late Joseph and Ruth (Ward) Harrington. Following high school he enrolled at Boston College and as a member of the class of 1961 he was granted the BSBA (Bachelor of Science in business administration) degree.

He entered St. John's Seminary and following theology studies he was ordained to the priesthood at Holy Cross Cathedral on May 26, 1966 by Richard Cardinal Cushing. His first assignment was to the relatively new parish of St. Bartholomew in Needham where he served until October 1968. He then was assigned as an assistant to the very new auxiliary bishop of the archdiocese, Bishop Daniel Cronin who was also the pastor of St. Raphael Parish in Medford. He remained there until May 1977.

That spring Cardinal Medeiros named him an assistant in the archdiocesan office of Religious Education and he lived in residence at St. Eulalia Rectory, Winchester. Six years later on March 25, 1983 he was named Archdiocesan Director of Youth Ministry and then helped move the office into a new direction and focus and was named director of the then newly formed Catholic Youth Apostolate. He lived in residence during this time at St. Ann in Quincy's Wollaston section.

In the almost ten years he served the youth of the archdiocese in archdiocesan leadership, he developed new programs, brought a renewed spiritual focus to existing ones and tried to incorporate new ideas alongside proven existing programs.

Cardinal Law named him pastor of St. Mary Parish in Randolph on Dec. 18, 1992. Just prior to that appointment he had been part of the priestly renewal program at the Vatican II Institute at St. Patrick Seminary, Menlo Park, Calif. He served the Randolph parish for two terms with great dedication. A series of health problems made it impossible for him to keep up with the demands of the parish and Archbishop O'Malley granted him senior priest/retirement status on Aug. 12, 2005. Initially in retirement he lived at St. Francis of Assisi Rectory Braintree, where Father Kevin Sepe, the parish's pastor and his whole parish, really provided excellent care and support. On Nov. 18, 2008 he moved to Regina Cleri where his health needs could be more easily and readily be met.

Bishop Robert Hennessey said that the gathering of priests and the packed church at St. Mary was a "clear testimony to Father Harrington's effectiveness as a pastor and a brother priest. The funeral Mass was a tribute to his priesthood."

At the end of the funeral Mass Archbishop Cronin related a wonderful story about his first conversation with Father Harrington. When Father Harrington called to chat with the new pastor of the Medford parish (who was also new auxiliary bishop of the archdiocese) he said "My father knows your father!" The two hit it off and worked well for the two years while the bishop was the pastor and before his transfer to Fall River in 1970. The archbishop, with some emotion, said he hoped that, when his time to meet the Lord came, that Father Harrington would be there to greet him and introduce him to his Father.