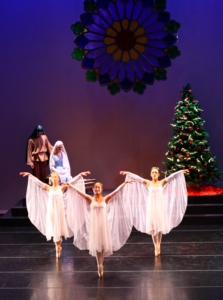 BRAINTREE -- This year, a number of young dancers received their Christmas wish early.

Father Robert Ver Eecke, SJ, longtime artist-in-residence at Boston College and pastor of St. Ignatius Loyola Parish on the campus there, is launching a new Christmas show that will give scores of young performers the chance to convey the Christmas story to audiences through dance.

Father Ver Eecke had produced a longstanding show that cast young performers alongside professional dancers; but to the particular disappointment of younger performers, he drew the curtain on the show two years ago citing financial and sustainability concerns.

However, this year he decided to produce a new show primarily to give the young dancers a chance to continue the Advent tradition they love.

"I was not planning to do anything," Father Ver Eecke said. "The children who would be performing were disappointed they would not have the chance to be performing in something like this."

Father Ver Eecke's new show, "Christmas Reflections," incorporates music and dance to tell the Biblical story of Christmas. Performances are scheduled for 7:30 p.m. on Dec. 17 and Dec. 18 and 19 at 3 p.m. at Boston College's Robsham Theater. General admission is $15.

The show runs in three parts, narrated by the figure of St. Luke the Evangelist. The first part of the performance, penned by Father Ver Eecke for this show, is particularly geared towards engaging children, telling the story of "Shep, the Sleepy Shepherd." The show's second part contains an Irish version of the Christmas story with performances by the O'Dwyer School of Irish Dancing in nearby Hyde Park. In the third segment the narrator shares how different cultures tell the Christmas story.

"It's a very, very lively Christmas celebration from a faith perspective, but it's also enjoyable," Father Ver Eecke said.

"Christmas Reflections" features a cast of about 50 members, roughly half of whom are children. The remainder of the cast is comprised of teens and professional dancers, including Boston College alumni and students.

Since their September auditions, performers have rehearsed every Saturday for the last 10 weeks.

John Riley's three daughters, ages 4 through 8, are among those children who will be performing in the show this year, after repeated performances in Father Ver Eecke's former show, "A Dancer's Christmas."

"He really has focused on Christmas through a child's eyes, and to make sure children are as much a part of the production as they can be," Riley said. "They enjoy being part of a production, being part of an overall company and seeing how a show comes together."

Riley also said the show is gratifying for parents of the performers as well because it focuses on Christ amidst the materialism surrounding Christmas in modern culture.

Father Ver Eecke, now 62, said he always has had an interest in theater, and since 1975, has been involved in liturgical dance. About 30 years ago, he was a choreographer for a number of BC students who were trained dancers.

"A Dancer's Christmas" began as a way to integrate dance into their spiritual lives.

Eventually, he says, the show "became one of Boston's holiday traditions."

However, he cancelled the show after the 2008 season amidst rising salaries for dancers and the increased difficulty in sustaining the production.

He said his new show aims to help audiences "see Christmas through the eyes of children with that sense of wonder."

Father Ver Eecke said the new show is different, "but it shares very much the spirit and spirituality of 'A Dancer's Christmas.'"