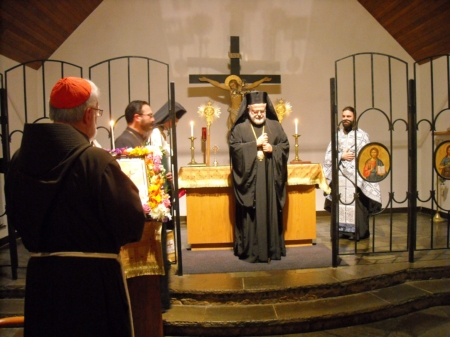 'That evening, I celebrated the Feast of St. Andrew with Greek Orthodox Metropolitan Methodios. Each year, following the example of the Holy Father and the Ecumenical Patriarch of Constantinople, we jointly celebrate the feasts of St. Andrew and St. Peter.' Pilot photo/CardinalSeansBlog.org

On Monday (11/29), quite providentially, I was scheduled to have Mass and Confirmations at the Billerica House of Corrections. Because the Middlesex County sheriff, James DiPaola, died very tragically, it was an opportunity to console his staff and colleagues at the House of Corrections. We offered the Mass for the repose of his soul and for the consolation of his wife and family.

Thirteen young men were confirmed at the Mass. Their families were able to attend the confirmation, which made it very special.

There were also three deacons with me that day. Deacon Jim Greer, who is in charge of our prison ministries throughout the archdiocese, and Bill Emerson, who is a chaplain at the Billerica prison, assisted me on the altar. We also had a Melkite deacon with us -- Deacon John MacMillan. After the Mass and confirmations, we had a lunch that was served by the culinary training program they have there in the prison. It was amazing to see the caliber of training they are getting because it was a wonderful lunch.

That evening, I celebrated the Feast of St. Andrew with Greek Orthodox Metropolitan Methodios. Each year, following the example of the Holy Father and the Ecumenical Patriarch of Constantinople, we jointly celebrate the feasts of St. Andrew and St. Peter.

The Apostles Andrew and Peter were brothers. Andrew was the founder of the See of Constantinople and Peter the See of Rome, the Diocese of Rome.

In a very dramatic gesture of longing for unity between our Churches, the pope always sends a delegation to Constantinople to be present at the Phanar for the celebration of St. Andrew, and conversely the Ecumenical Patriarch sends bishops who represent him at the Vatican for the Feast of St. Peter. We do parallel celebrations here in Boston between Greek Orthodox Metropolitan Methodios and myself. I was at their celebration at the Cathedral Chapel in Brookline, where we celebrated the vespers for the Feast of St. Andrew, had the blessing of the bread and veneration of the icon of St. Andrew. On the occasion, Metropolitan Methodios presented me with a beautiful mosaic of my coat of arms that was created by a very noted iconographer, George Papastamatiou.

We were very pleased that Father Ed O'Flaherty, Father David Michel and Vito Nicastro, of our Office for Ecumenical and Interreligious Affairs, accompanied us for the occasion. The mosaic is hanging outside the chapel in our Pastoral Center.

Visit with priest from Regina Cleri

The priests from Regina Cleri came to visit the Pastoral Center Wednesday for lunch and a tour of the building. It was also a Thanksgiving celebration to recognize and thank them for their many years of service.

In the evening we had our Jesu Caritas meeting with those priests ordained ten years or less. There were about 30 priests there for it. We had a Holy Hour, Vespers, dinner and discussions talking about the spiritual and pastoral life of a priest and theological readings. It was a wonderful discussion.