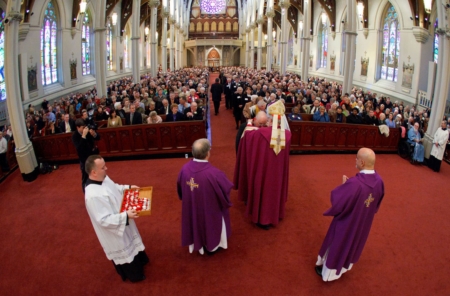 Cardinal Seán P. O'Malley presents the 2010 Cheverus Awards for service to the Church at a Nov. 28 Vespers service at the Cathedral of the Holy Cross. Pilot photo/Gregory L. Tracy

Cardinal O'Malley presented 98 Catholics with awards at a 3 p.m. prayer service that packed the Cathedral of the Holy Cross to capacity with family and parishioners of this year's award recipients. The honorees work in parishes, Catholic schools, and other Catholic entities around the archdiocese.

During his homily, Cardinal O'Malley said the Cheverus Awards are meant to recognize and thank recipients for their "humble" service to the Church. He referred to recipients as "unsung heroes and heroines" of the archdiocese.

"The archdiocese would come to a screeching halt without the army of volunteer staff that carries out day by day our faith and activities," he said.

Award recipients were nominated by their pastor or auxiliary bishop and chosen by Cardinal O'Malley.

The cardinal instituted the tradition of the Cheverus Awards in 2008. The award is named for Bishop Jean-Louis de Cheverus, who became Boston's first bishop in 1808. The award consists of a medallion of Bishop Cheverus's likeness hanging from a red ribbon.

They are typically awarded on the Feast of Christ the King, which this year was on Nov. 21. However, on that day Cardinal O'Malley was attending the consistory in Rome, so the awards were postponed one week later to the first Sunday of Advent.

"It's important to be recognized," said recipient Deacon Richard Bilotta, of St. Margaret Parish in Burlington. "The value is in just helping people feel what they're doing is worthwhile to the Church and to encourage other people to be more involved in the Church."

Deacon Bilotta has been a deacon for ten years, and has worked in St. Margaret's marriage preparation and religious education ministries.

"It means loving the Church," he said. "That's what we are called to do."

"I want to do what I can to bring as many people as possible to the Church and to Christ," he added. "That's why I became a deacon.

Michael Carney was another of this year's recipients honored by Cardinal O'Malley for their work in living Christ's command to love as the cardinal discussed in his homily.

Carney, a general contractor, serves on the building and property maintenance committee at St. John the Evangelist Parish in Winthrop.

The group helps with upkeep of parish facilities, and has worked on numerous recent updates to parish buildings including installing air conditioning and a new sound system in the church. Carney's committee is currently working to realign the lighting in the church to spotlight its artwork.

"We're really low key," Carney said. "We'll do a project and on Sunday when people come to Mass people notice it. It's a lot of fun."

McCann is a longtime parishioner of St. Helen Parish in Norwell, where she volunteers in the parish's religious education office, is a Eucharistic minister and a member of the choir.

In the past, she taught religious education there and was a member of a parish theater group that performed plays.

McCann reflected on her longstanding service to the parish.

"You get the benefits you get back from working with people," she said.

"I don't know how to explain it," she continued. "It's wonderful. It makes you feel good inside."

As she accepted her award, she was in the company of many others like herself who serve the local Church.

"It's great to see so many people that give of themselves without even looking for a reward," McCann said.

Joseph D'Arrigo, Boston (2009 recipient being presented his award in 2010)