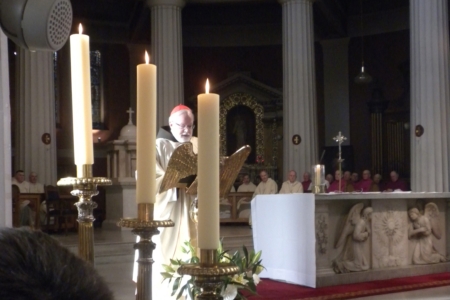 'They have this annual celebration of the feast of their archdiocese to which the cathedral chapter, the canons of the cathedral and the auxiliary bishops, are invited. ...As I mentioned last week, I was able to address the congregation during the Mass.' Pilot photo/CardinalSeansBlog.org

As I mentioned last week, we have begun the visitation to Ireland that the Holy Father announced in his letter to the Church in Ireland. I was accompanied by a team of people from the archdiocese -- Father John Connolly, Tom Hannigan and Barbara Thorp.

I began the visitation with a Mass last Sunday, Nov. 14 at St. Mary's Pro-Cathedral in Dublin. Archbishop Diarmuid Martin had invited us to participate in their patronal feast, the Feast of St. Laurence O'Toole, an Irish bishop who lived about 1,000 years ago and was the second bishop of Dublin. He built the original cathedral, which was taken over by the Anglicans at the time of the Reformation. Incidentally, that is why the Catholic cathedral of Dublin, St. Mary's, is called the "pro," or acting, cathedral. The Cathedral of the Holy Trinity is still considered the true cathedral, the one that was established by the pope and built by St. Laurence O'Toole.

They have this annual celebration of the feast of their archdiocese to which the cathedral chapter, the canons of the cathedral and the auxiliary bishops, are invited. They have a magnificent choir, the Palestrina Choir. The main Mass at the cathedral is a Latin Novus Ordo Mass, with the readings done in English, and the music from this extraordinary choir. In fact, this choir visited Boston a few months ago and sang at the Mission Church.

As I mentioned last week, I was able to address the congregation during the Mass. I spoke of how we come to listen, and to make the Holy Father's solicitude present to them. We came with a great love for Ireland and the Irish people in our hearts.

After the Mass, we were warmly greeted by the parishioners. Unfortunately, there was some controversy because of some of the concelebrants who were at the Mass, but we were not there to endorse or indict anyone. We were there to participate, at the invitation of the archbishop, and as a way to begin our visitation in the context of prayer as well as to give some words of explanation to the Irish people.

From Sunday to Thursday (11/14-11/18), we conducted almost 60 interviews of a wide range of people involved with matters concerning the Church in Ireland; those who work in child protection, survivors of clergy sexual abuse, representatives of advocacy groups who assist the survivors, archdiocesan vicars, lay leadership in the archdiocese, personnel from the Catholic schools and parishioners who assist with child protection programs at the local level.

It was a very intense but a good week. We look forward to returning to Ireland in the new year, to continue these listening sessions and the visitation.

From Ireland, I went to Rome for the consistory for the creation of new cardinals. As he has done in the past, on Friday, the day before the consistory, the Holy Father convened a meeting of the College of Cardinals. It was a wonderful opportunity to be with the Holy Father and with each other. During the course of the day we discussed many of the issues facing the Church in the world today including the question of religious freedom in light of the terrible persecution of the Church in places like the Middle East. ...In my own comments during the discussion period, I encouraged the Holy See to act quickly in initiating universal norms on the issue of clergy abuse.