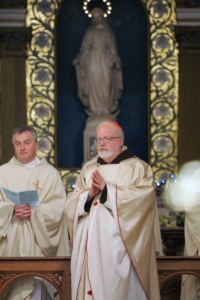 DUBLIN (CNS) -- Cardinal Seán P. O'Malley, visiting Dublin to begin a Church investigation of the Dublin Archdiocese, told Catholics he came "to listen to your pain, your anger, but also your hopes and aspirations."

"I have come to listen, not to offer a quick fix," he told those in attendance at a Mass in St. Mary's Pro-Cathedral Nov. 14. The cardinal is responsible for investigating the country's largest archdiocese after the Church was shaken by revelations of clerical abuse and mishandling and cover-up by Church leaders.

Cardinal O'Malley recalled his Irish roots, outlining his familial ties and affection for the country, saying, "It is with that same love for the Irish people that I come to this visitation."

At least one victim of clergy sexual abuse criticized that two bishops named in the 2009 Murphy Report, which revealed a series of cover-ups by Church officials, concelebrated the Mass with Cardinal O'Malley.

Retired Bishop Dermot O'Mahony, who as Dublin auxiliary failed to report abuse allegations to the authorities, and Dublin Auxiliary Bishop Eamonn Walsh, who resigned in the wake of the report but had his resignation rejected by Pope Benedict XVI, concelebrated the Mass.

Abuse victim Marie Collins, who met Cardinal O'Malley during his trip, told Catholic News Service she was "deeply disturbed" that the prelates attended the Mass.

"These were men named in a report that unveiled the most dreadful abuse and corruption in the Irish Church; it's amazing that a man charged with investigating this is concelebrating Mass with them," she said.

Cardinal O'Malley said that his review will not duplicate previous governmental inquiries.

"In Dublin, much has been done already to address the crimes of the past and to develop sound policies to ensure the safety of children and to provide assistance to the victims of child abuse. The task of the visitation is to bring new eyes to the situation, to verify the effectiveness of the present processes used in responding to cases of abuse," he said.

Cardinal O'Malley will meet with victims of abuse, Irish priests and laypeople to gauge their views on the abuse scandal and the process of renewal of the Catholic Church in Ireland.

In his homily at the Mass, Dublin Archbishop Diarmuid Martin welcomed Cardinal O'Malley as a hopeful sign for renewal.

"The Archdiocese of Dublin today is wounded by sinful and criminal acts of priests who betrayed the trust of vulnerable young children. This behavior has wounded the Body of Christ. People have lost their trust in the Church. For many young people, the recent scandals have become the final element in their alienation from the Church," Archbishop Martin said.

However, he said, renewal will come from conversion.

"That conversion, in its turn, requires recognition of what was done wrong in the past -- particularly to the weakest," he said. "It is not about putting the past aside, but of bearing the wounds of the past -- and the truth of the past -- with us on a painful process."

Cardinal O'Malley is expected to return to Dublin early next year for the next phase of the visitation. Archbishops Collins and Prendergast are expected in Ireland before Christmas, and Archbishop Dolan is not expected until early 2011.

The country's religious orders and congregations are in the process of completing questionnaires that will form the first step in the visitation of religious.

In a mid-November statement, the Vatican said it would issue a comprehensive summary of the investigations' findings when they are completed.