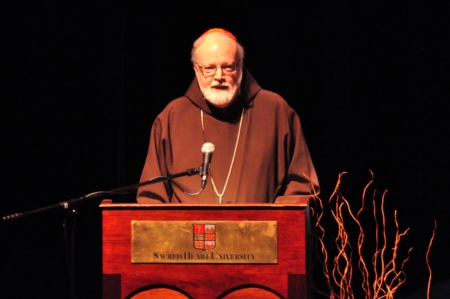 'I was in Connecticut Saturday (11/6), where I spoke at the Diocese of Bridgeport's Catechetical Congress held at Sacred Heart University. They had about 800 people there.' Pilot photo/CardinalSeansBlog.org

Yesterday (11/11), as you all know, was Veterans Day, a day when our country pauses to remember the sacrifices of those who have served in our armed forces. Veterans Day, in times like these, when we are experiencing war and our troops are in harm's way, reminds us of our obligation to pray for our Armed Forces overseas and all those who suffer from the scourge of terrorism. We're also very proud of the extraordinary service that the priests of the archdiocese have provided, and continue to provide, to the men and women of the Armed Forces as chaplains of the different branches of the military.

I also wanted to take a moment to remember those who were killed in last week's (11/1) tragic attack on worshipers at the Syriac Catholic Cathedral of Our Lady of Salvation in Baghdad that killed about 60 people and two priests. The attack was one more example of the persecution of the Church in that country. Half the Catholics have already been driven out, churches have been attacked and a bishop has been murdered with complete impunity. This event is just one more of the terrible results of this war. We pray our leaders will be able to bring about a just peace there. Certainly the themes that were dealt with at the synod on the Middle East underscored the dire situation of the Church in that part of the world. All of their fears were confirmed by this terrible attack. The situation in Iraq mirrors what's happening in other countries of the Middle East, where Christians have been present there for 2,000 years. The area has been their home, and now they are being driven out. This week, President Obama was in Indonesia and repeated his call for better relations with the Muslim world. That is something that we all desire. We long for the day when the moderate Muslims will begin to denounce these unjust terrorist attacks on innocent people. In the meantime, our prayers accompany the people of Baghdad and all those who lost loved ones there.

I was in Connecticut Saturday (11/6), where I spoke at the Diocese of Bridgeport's Catechetical Congress held at Sacred Heart University. They had about 800 people there. The theme was "Do Whatever He Tells You," which incidentally is also my episcopal motto.

I gave a keynote address and the other speaker was Immaculee Ilibagiza, who has spoken at our Men's and Women's Conference here in the archdiocese. Sacred Heart is one of the few diocesan universities in the country and we were able to have a tour of the university's beautiful new chapel.

This year marks the 100th anniversary of St. Patrick School in Stoneham, and I went to their centennial celebration Sunday (11/7).

For over 80 years, the Sisters of Providence staffed the school, and many of them were there. During the celebration they recognized the sisters, and there was also a papal blessing bestowed on the pastor, the parish and all who were involved in the school.

In a very fitting tribute with Veterans Day coming up, they also awarded diplomas to former students who left school in the 1940s to fight in World War II. One of those students was killed in the war and others have subsequently passed away, and they awarded those diplomas posthumously. However, one gentleman, Mr. Andrew Prive, was present to receive his high school diploma. Though presently it has just grades 1 through 8, at the time of the Second World War St. Patrick's had both a grammar school and a high school. A number of people who were at the Mass were graduates of that high school. The school is flourishing under the wonderful work of the new principal, Arthur Swanson.