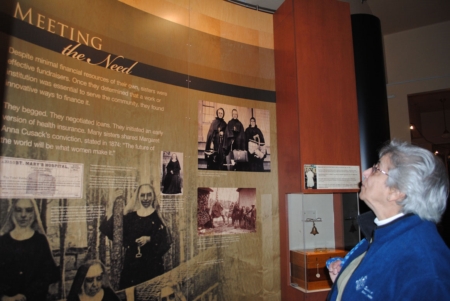 Sister Theresa Jardin, of the Archdiocesan Office of Child Advocacy, views the account of the challenge of financing ministry in the Women and Spirit exhibit at Ellis Island. Pilot photo/ Courtesy Sister of St. Joseph

The Sisters of St. Joseph of Boston hosted an Oct. 30 bus trip to Ellis Island to visit the exhibit "Women and Spirit: Catholic Sisters in America." More than 150 sisters and associates of nine congregations in the area joined in the day-long pilgrimage. Women and Spirit chronicles the untold stories of the innovative women who played a significant role in shaping the nation's social and cultural landscape.

Sister Mary Oates, a Sister of St. Joseph of Boston, is among the scholars who guided the exhibit content development for accuracy, balance, and compelling storytelling.

After viewing the exhibit when it opened in May 2009, Sister Mary commented, "I was impressed by the quality of the exhibit and its artifacts. There was a sense that it was all sisters together. One thing that struck me was the unity and power of hundreds of thousands of religious women depicted in this exhibit; no matter what community, we are one. The exhibit is spectacular."

This milestone compilation of artifacts and multi-media presentations reveals a unique perspective on American history and includes many inspiring stories.

First arriving on America's shores almost 300 years ago, Catholic sisters built and led schools, hospitals, orphanages, colleges, and other social institutions that have continued to serve millions of Americans in the intervening years.

"This is an important and unique exhibit," said Judy M. Giuriceo, Curator of Exhibits and Media for Statue of Liberty National Monument and Ellis Island. "The artifacts and materials featured in the exhibit explore an often overlooked aspect of immigration and women's history -- how Catholic sisters, often immigrants themselves, provided needed social services to immigrant communities."

The untold stories of these unsung heroes are recounted through rare, heretofore unseen artifacts, vivid first-person accounts, photographs, and both modern and archival video.

Sister Pat Quinn, CSJ, who recently professed final vows, commented on the exhibit saying, "The background music drew me in. I looked around and observed sisters reaching out to the pictures and artifacts of their congregations. At the same time, there was a sense of oneness in the realization that this is where we have been and where we continue to be as we move toward the future."

Sister Mary Rita Grady, archivist for the Sisters of St. Joseph, said, "I appreciated the design of the exhibit. It made evident both the breadth and depth of the efforts of the sisters, and pointed out their activities for the future."

The traveling exhibition opened at Ellis Island on Sept. 24 and is scheduled to run through Jan. 22. Other locations, dates, and resources about the exhibit are listed on the Women and Spirit website at www.womenandspirit.org.