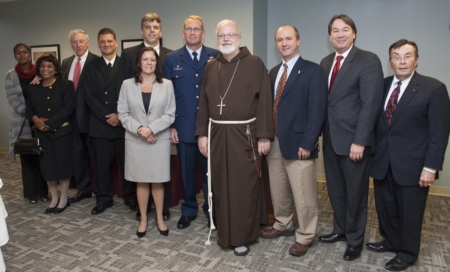 ''I attended a luncheon for the Order of Malta. The Order of Malta recognized various people who helped in relief efforts after the earthquake in Haiti this year, and who particularly aided their hospital, Sacre Coeur in Milot.'' Pilot photo/CardinalSeansBlog.org

Recognition Ceremony with the Order of Malta

Last Thursday (10/21), I attended a luncheon for the Order of Malta. The emcee was Jim O'Connor. The Order of Malta recognized various people who helped in relief efforts after the earthquake in Haiti this year, and who particularly aided their hospital, Sacre Coeur in Milot. They honored the head of nursing, Michelle Fey; the head of the emergency medicine, Dr. Mark Perlmutter; and the Caritas Christi Health Care CEO Dr. Ralph de la Torre. They also honored Coast Guard Commander James Spotts, Navy Captain Andrew Johnson and Navy Officer Michael Holmes for their role in supplying food and helicopter transportation for the injured. It was a very touching luncheon.

That afternoon, I had a visit from Father Paul Hurley, brother-in-law of Kevin Kiley, who works at our Pastoral Center. Father Hurley is an Army chaplain and he is back from overseas, and will be returning to deployment after a short visit home. He talked about the difficulties chaplains experience and the shortage of priests in the military.

On Friday (10/22), I went to St. Agnes Church in Arlington for a Mass to celebrate the 50th anniversary of Arlington Catholic. I also had lunch there with the principal, the staff and their pastor, Father Brian Flatley. It was a beautiful celebration. The students sang so well! It shows what Catholic schools can accomplish for the religious formation of our young people. The school is thriving, with over 800 students in the high school and more than 300 students in the grade school.

That day (10/23) I celebrated the Mass of candidacy for our permanent diaconate program. Deacons Dan Burns and Patrick Guerrini, of our diaconate office, were on the altar with me. It was at St. Bernard Church, where Father Frank Silva is pastor. The parishioners were very gracious. There was a lovely reception that the parish organized for the deacon candidates and their families afterwards.

On Sunday (10/24), I went to MIT, as I occasionally do, where I was the main celebrant at a Mass for the students there. There was a wonderful standing-room only crowd which extended out the door and down the corridor. The music is always extraordinary. They had many musicians playing the cello and other instruments. Afterwards I attended their coffee hour and had a chance to visit with our FOCUS team there, as well as other people from the MIT community.

On Wednesday (10/27) I attended a meeting of the Regis College Haiti Project Advisory Board. Regis first became connected to nursing education programs in Haiti through the assistance of Partners in Health, established here in the Boston area by Dr. Paul Farmer more than twenty years ago. Dr. Mary Jane England, President of the College, and Dr. Toni Hays, Dean of the School of Nursing and Health Professions, are leading Regis' efforts to expand the college's collaboration with Haiti's Ministry of Health through the International Nurse Faculty Partnership Initiative (INFPI). ... Through my work with Catholic Relief Services and the U.S. Bishops Conference Subcommittee for Haiti, I hope to be able to be help with this important initiative. We are blessed by the commitment that Regis College has made to guide this project forward.