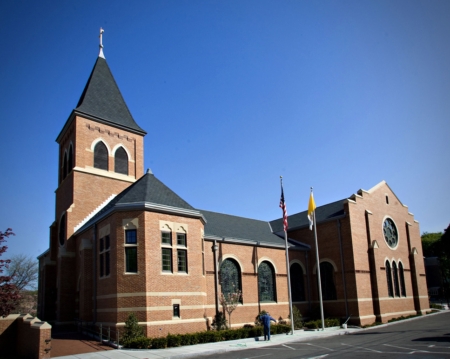 The Archdiocese of Boston has announced that Father Francisco Anzoategui has been appointed Director of the Hispanic Apostolate for the archdiocese. Father Anzoategui, also known as Father Paco, succeeds Bishop Emilio Allue, who served as episcopal vicar. Bishop Allue retired earlier this year.

"We are blessed by the diverse and enriching community of disciples who make up our Archdiocese of Boston," said Vicar General and Moderator of the Curia Father Richard Erikson in a Nov. 1 e-mail announcing the appointment. "The work of the Hispanic Apostolate is an important ministry in the local Church. We give thanks to Father Paco's energy, leadership and commitment to serve."

A native of Mexico, he came to the Archdiocese of Boston in 1997, and has since served as a parochial vicar at St. John the Baptist Parish in Peabody, St. Patrick Parish in Lawrence and St. Rose of Lima Parish in Chelsea. He was incardinated into the archdiocese in 2002.

Regis College will host former First Lady Rosalynn Carter Nov. 8 at 4:00 p.m. to speak about her recent book, "Within Our Reach: Ending the Mental Health Crisis." The event will take place in the atrium of the Fine Arts Center, and will also include a book signing. It is free and open to the public.

The book details a system that Carter says fails those in need, despite recent scientific breakthroughs in the diagnosis and treatment of mental illness.

For over 35 years, Carter has served as a mental health advocate.

Sacred Heart Church in Weymouth recently received a Bulfinch Award for Best Civic, Institutional or Ecclesiastical Building by the New England Chapter of the Institute of Classical Architecture.

The award is given for traditional buildings completed in the last five years.

The current Sacred Heart Church was completed in 2007, replacing the former church that was destroyed by fire in June 2005.

The Dorchester Knights of Columbus Council #107 is hosting a food drive during the month of November to benefit food pantries at the Dorchester parishes as well as the Catholic Charities food pantry at Yawkey Center. Those who wish to contribute may bring non-perishable food to weekend Masses at their respective parishes.

Magdalen College, in Warner, N.H., announced its name change to The College of Saint Mary Magdalen Oct. 16. College officials say the change reflects a desire to clearly proclaim the college's Catholic identity, bring greater honor to its patroness, and foster renewal within the college.

The college, which was founded in 1973, offers an integrated curriculum based on the traditional liberal arts.

The College of Saint Mary Magdalen is one of only twenty colleges in the United States to be listed in The Newman Guide to Choosing a Catholic College.

On Oct. 4, the Inner-City Scholarship Fund (ICSF) hosted its ninth annual Back to School Cup at Wollaston Country Club. Over 140 golfers participated in the event. The golf outing raised a record-setting exceeding $100,000 to benefit the ICSF, which gives scholarships to deserving inner-city Catholic school students in the Archdiocese of Boston.