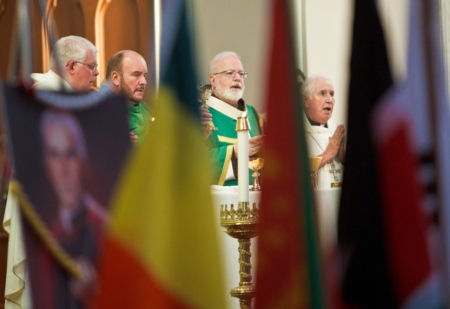 Director of the office of the Propagation of the Faith Father Rodney Copp, Deacon Patrick Guerrini, with Cardinal Seán P. O'Malley and Bishop Emeritus of Morondava, Madagascar Donald Pelletier are seen through flags of the countries served by Boston Missionaries at the Mass to mark World Mission Sunday, Oct. 24 at the Cathedral of the Holy Cross. Pilot photo/ Gregory L. Tracy

SOUTH END --World Mission Sunday recognizes the contributions of Catholic missionaries who have courageously taken the Good News to foreign lands and, at the same time, encourages Catholics at home to prayerfully support the Church's missionary efforts.

Joining fellow Catholics around the world on Oct. 24, the Archdiocese of Boston marked World Mission Sunday with a Mass at the Cathedral of the Holy Cross and a reception in the Cathedral High School gymnasium.

"The first thing is to express gratitude to those men and women who have given so much of their lives to spread the Gospel and to raise awareness in everyone else that we are all called to be a missionary in one way or another," said Father Rodney Copp, director of the archdiocese's Propagation of the Faith office.

Cardinal O'Malley served as the principal celebrant and homilist at the multi-lingual Mass, and he was assisted at the altar by Bishop Donald Pelletier, the retired bishop of Morondava in Madagascar; Father Georges El-Khalli, pastor of Our Lady of the Cedars of Lebabon, a Maronite church in Jamaica Plain; Father Copp and several other priests of the archdiocese.

The Mass began with a procession of flags from countries served by Boston missionaries, and continued with music by the Cape Verdean Choir from St. Edith Stein Parish in Brockton, the choir of St. Peter Lithuanian Parish in Boston, the Korean Catholic Community Choir of Boston and the Caritas and Unitas Choirs.

Scripture readings were proclaimed in Portuguese, Spanish and English, and the Prayers of the Faithful were read in Korean, Chinese, Cape Verdean, Spanish, Lithuanian, Portuguese and English.

Cardinal O'Malley's homily recalled Boston's long missionary history, starting from its founding in 1808 by Bishop Jean-Louis Lefebvre de Cheverus, a French bishop who came to America as a missionary and ministered to Catholics in New England, to the establishment of the St. James Society in the 1950s by Cardinal Richard Cushing to send Boston missionaries to South America.

"It is a very meaningful experience for us to come together and celebrate Mission Sunday because it is underscoring the fact we are a missionary Church and we are interdependent," Cardinal O'Malley said. "We are a mission Church and we have so much to learn and profit from the churches you represent in Asia and Latin America."

"Making disciples is our job as Jesus' disciples," he also said.

He encouraged those in attendance to spread their faith and share their knowledge of the Lord.

"We have something greater than a cure for cancer or a cure for AIDS. We have our faith," Cardinal O'Malley said. "That is the greatest treasure of all and it behooves us to share our faith with whomever we can."

He encouraged people to pray for the work of missionaries, and said that prayer results in the desire to do God's will, as well as uniting Christians throughout the world with one another.

"Love and humility transforms the most significant tasks into great deeds," Cardinal O'Malley said. "Conversely, self-love and pride can transform prayer, love and tithing into the most empty of activities."

Following the homily, Cardinal O'Malley blessed the assembly's World Mission rosaries, which had been distributed to attendees as they entered the cathedral for the Mass.

Sister Evelyn Frieder arrived in South Korea in 1957, four years after the Korean War had ended.

At the invitation of the Columban Fathers, Sister Frieder's order, the Missionary Sisters of St. Columban, went to a medical clinic in South Korea to meet the demand for nurses in the area. They also eventually established a nursing school to train qualified nurses. The school is still in operation today, she said.

Sister Virginia Mozo, who read the second reading at the Mass, performed missionary work in Chile from 1989 to 1995 and in Pakistan from 2004 to 2007.

In Chile, Sister Mozo served as the director of the youth ministry office for the Diocese of Araucania, and in Pakistan she was involved in interfaith dialogues with Hindus and Muslims.

Living in the arid village of Kunri, where water was scarce, she met a Muslim woman who had her own spring.

Many times, she said, her Muslim neighbor, provided water for Sister Mozo and her fellow sisters, despite the fact that they were Christians.

"We have one God," Sister Mozo said. "We're one family. We're one world in God's mission."

Sister Mozo, in her comments to The Pilot, echoed Cardinal O'Malley's homily and his citing of Jesus' Scriptural command to "make disciples of all the nations."

"This is what Jesus had entrusted to us in the Gospel of Mark," Sister Mozo said.