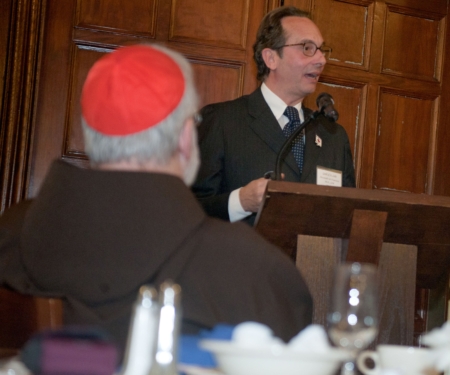 Alessandro di Francisis, a physician who heads the office charged with investigating reports of miraculous healings at the shrine in Lourdes, France, delivers his keynote address at the dinner following the annual White Mass Oct. 22. Pilot photo/Jim Lockwood

BRIGHTON -- Kicking off the organization's centennial year, the Guild of St. Luke for Catholic medical professionals met for their annual White Mass and dinner Oct. 22 at St. John's Seminary.

Cardinal Seán P. O'Malley was the main celebrant and homilist for the Mass, and keynote speaker for the dinner was Alessandro di Francisis, a physician who is medical director of the Medical Bureau of Lourdes, France. The bureau investigates reports of miraculous healings linked to the shrine there.

Each year, members of the guild and their families gather for Mass and a dinner on an evening near the Feast of St. Luke the Evangelist, patron saint of physicians.

The Boston chapter of the Guild of St. Luke was founded in 1910 by Cardinal William O'Connell.

Jackson said that this centennial year will be marked by other events, such as a medical seminar, and will close with a gala dinner and White Mass next October.

According to the guild's newsletter, a regional conference is planned for Oct. 2011 that will be held jointly with the Midwest and Chicago chapters of the guild.

In his homily, Cardinal O'Malley discussed the role of medical professionals in spreading the Gospel of Life.

"Those of you who are members of the health care professions, the profession of St. Luke, you have a special mission to serve the Lord in the sick and the suffering and be apostles of the Gospel of Life," he said.

He called on Catholic medical personnel to stand up for the Church's teaching on the sanctity of life and implement the U.S. bishops' medical care directives in their practice of medicine.

"There is a war against conscience protection in our country and we need the medical profession to speak up and speak loudly," Cardinal O'Malley said.

"We need for Catholic health care professionals to help teach the Gospel of Life -- to be witnesses and not go into the witness protection program," he added.

Before the close of the Mass, Jackson led those present in the Physicians' Prayer written by Pope John Paul II in 2000.

Following the Mass, the roughly 150 attendees proceeded from the seminary chapel to the refectory for dinner.

He said reported miracles are recognized as unique situations, and then investigated and confirmed by his bureau. Final recognition of a miracle is given by the bishop of the diocese in which the healing is said to have originated.

Bishops follow specified criteria in evaluating potential miraculous cures, he said. The bishops see if the disease was precisely diagnosed and was cured "completely and permanently."

He said confirmed cures illustrate that faith and science do not conflict.

"There is no conflict as I see it because there is a space where faith and science meet, and that is the human person," di Francisis said.

"Lourdes and the Church do not need miracles as signs," di Francisis said. "They need the truth."

Doctors who attended this year's White Mass spoke about the importance of the annual event.

"It emphasizes the spiritual side of medicine and helps you reach at a deeper level the patients and their families," said Nick Madias, chairman of medicine at Caritas St. Elizabeth's Medical Center in Boston.

"I think it's important for physicians of the Catholic tradition to meet, share experiences and hear that their Catholic faith has relevance to where they work," said Chalko.

Over the last 100 years, hundreds, even thousands of Catholic physicians have shared how their faith influences their work through involvement in the Guild of St. Luke.

"We're going to look forward to the next hundred or more," said Jackson.