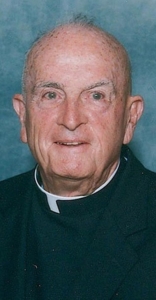 Saluted variously as a "pioneer" a "missionary" and a "legend," Msgr. John F. Scully, a priest ordained by Archbishop Richard Cushing on May 6, 1948 for the archdiocese, who in 1953 became a priest of the then almost statewide diocese of St. Augustine, Florida and in 1968 of the newly established diocese of St. Petersburg died while concelebrating Mass at St. Stephen Church, in Valrico, Fla. The 86 year old priest had been living in retirement in the parish.

A Dorchester native he was a son of the late Michael and Catherine (Murphy) Scully of St. Margaret Parish. He was an alumnus of the archdiocesan seminaries, ordained at a time when there were more priests than the archbishop knew what to do with! Responding to a call from "Ten Acre" Joe Hurley, archbishop-bishop of St. Augustine, he went as a missionary to the Sunshine State, and he never came home. He was of that generation of builders as was his mentor "Ten Acre Joe" who was so nicknamed because he flew all over the state of Florida and purchased thousands of acres of land for potential parishes -- he required at least "ten acres" wherever he landed, thus his name.

Msgr. Scully was the founding pastor of five parishes, Sacred Heart, Pinellas Park; St. Patrick, Largo; Blessed Sacrament, Seminole; St. Catherine of Siena, Largo and St. Michael the Archangel, Clearwater, the latter two named after his mother and father respectively; founder of two elementary schools: St. Patrick, Tampa and Notre Dame, Spring Hill; and founding president of two diocesan high schools: Bishop Barry, St. Petersburg and Tampa Catholic, Tampa. He was also diocesan director of the Propagation of the Faith and brought Boston's missionary spirit to Florida and from there to Africa where he went on loan to Kenya where he founded Holy Family Parish in the national capital.

Gregarious beyond words, he returned to Africa to visit friends he had made there to celebrate baptisms, first Communions and marriages. And from his Florida office he raised funds for the support of the burgeoning Churches in Africa.

He was also the Rector of the Cathedral of St. Jude the Apostle in St. Petersburg and the vicar general of the west coast Florida diocese. His last assignment prior to retirement was a pastor of St. Theresa Parish in Spring Hill, Fla.

Tributes and expressions of sympathy came immediately and quickly on notification of his death from his current Bishop Robert Lynch; brother priests of St. Petersburg and Boston and especially from the many, many laity of the parishes and schools he founded and served.

Bishop Lynch spoke of Msgr.'s determination to stay in a parish "Even when he needed more care; I tried to convince him to move to an assisted living facility, but he and his pastor were happy to have him in Valrico. He was a legend"

Although a builder he was a sought after confessor as well. Folks would "wait for monsignor" rather than confess to anther priest, even though as one priest said "he was demanding, people appreciated his uncompromising direction on the basics of the faith."

His classmate, friend and scheduled celebrant and homilist at his Boston funeral, Msgr. Albert Contons said "He was always a busy priest." By all accounts he seemed to have packed into one lifetime several lifetimes of accomplishments.

Bishop Lynch was the principal celebrant of Msgr. Scully's Funeral Mass at St. Theresa in Spring Hill. According to his final wishes he came home at last to Boston and Msgr. Contons celebrated his funeral Mass at St. Margaret Church of Blessed Mother Teresa of Calcutta Parish in Dorchester on Oct. 29. Following the funeral Mass he was buried with his parents in Holy Cross Cemetery, Malden. His survivors are his nieces and nephews.