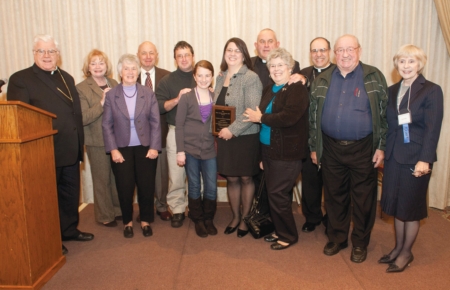 Diahne Goodwin, holding a plaque, was a recipient of this year's Sister Marion O'Connor, R.C. Award for Excellence in Catechetical Leadership at this year's Catechetical Congress. Goodwin is the director of religious education at St. Catherine of Alexandria Parish in Westford. Pilot photo/Jim Lockwood

RANDOLPH -- Parish catechists from around the Archdiocese of Boston gathered for spiritual nourishment, brainstorming, and to support and pray with one another at their annual convocation Oct. 23.

About 600 people -- parish religious education teachers, RCIA catechists, directors of religious education and youth ministers -- attended the Archdiocese of Boston's annual Catechetical Congress at The Lantana in Randolph. The theme of this year's congress was "In the Footsteps of the Master."

"It's a sharing, and you meet other people," said Mary Pearson, a longtime eighth grade catechist at Holy Family Parish in Rockland. "It's the pulling together of ideas and sharing something with people that all have a common goal."

The day-long event included a multi-lingual prayer service as well as separate English and Spanish keynote addresses. There were also bi-lingual breakout sessions, discussing specialized topics in catechesis. Attendees had the chance to browse catechetical materials from local and national book and multimedia providers and the presentation of the Sister Marion O'Connor, RC, Award for Excellence in Catechetical Leadership.

The congress attendees were almost evenly divided between the English and Spanish tracks.

"Catechetical congresses are meant to bring catechists in the archdiocese together to instruct them, to pray with them and encourage them in the work that they do," said Archdiocese of Boston Secretary for Faith Formation and Evangelization Janet Benestad.

Auxiliary Bishop Peter Uglietto proclaimed the Gospel and delivered remarks at the multi-lingual prayer service, which began the day.

Following the prayer service, Bishop Uglietto presented the Sister Marion awards to Diahne Goodwin, the director of religious education at St. Catherine of Alexandria Parish in Westford, and posthumously to Sister Thomasine Twomey, a parish catechist of St. Patrick Parish in Roxbury.

Vox Clara advises the Vatican regarding the new Mass translations that will be required for use by Advent 2011. Msgr. Moroney is also the rector of St. Paul's Cathedral in Worcester and a faculty member at St. John's Seminary.

In his address, he discussed how catechists can lead their students towards participation in the Eucharist, which Vatican II described as "the source and summit of Christian life."

He reminded catechists that through their own participation in the Mass their students will encounter transformed teachers and see Christ in them when they teach.

"To the degree you lead your students to that full, conscious and active participation in the sacred liturgy, which is their right and responsibility of their sacred baptism, yours is a sacred mystery," Msgr. Moroney said. "You are a shepherd who is leading them up the hill to the meaning of life."

Jim Drummey, religious education director at St. Stephen's in Framingham, enjoyed the message and the delivery.

"Being able to present religious concepts in a humorous yet very inspirational way at the same time, it takes skill to do that," he said. "You can see he had the whole group in the palm of his hand."

The Spanish program, meanwhile, was highlighted by a keynote presented by Father Francisco Anzoategui, co-pastor of St. Stephen Parish in Framingham.

"There is only one master and that witness is Jesus Christ, and when we decide to follow him, there are certain conditions of the disciple," Father Anzoategui said in a conversation with The Pilot afterwards.

He said his remarks highlighted the need to participate in a life of prayer, have a willingness to be formed by the example of Christ, and maintain a commitment towards building God's Kingdom in His name.

Anne O'Donnell, a second grade religious education teacher at St. Francis Parish in Braintree, has been attending the Catechetical Congress for the last five years.

"It was fantastic," she said. "It was a very powerful way of presenting how the Liturgy is the center of Catholic life."

Susan Abbott, the director of the archdiocese's religious education office, discussed the goals of the day-long program.

"It's inspiration and information," Abbott said. "To look around and see I'm not the only one doing this."

"To realize you're part of an amazingly important and blessed ministry in the Church, and gathering together is important," Abbott also said.