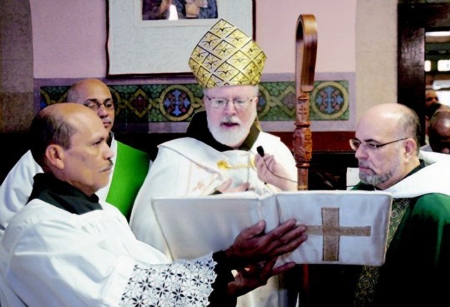 'Sunday (10/17) I went to St. Mary of the Assumption in Lawrence ... We also had the opportunity to bless the parish's newly restored 16-bell carillion, which hadn't functioned since it was hit by lightning several years ago. People were pleased to hear the bells ringing after so many years of silence.' Pilot photo/CardinalSeansBlog.org

We begin this week with some wonderful news: That the Holy Father has designated 24 new cardinals. Two of them are American -- Archbishops Raymond Burke and Donald Wuerl.

Cardinal-designate Burke had been Archbishop of St. Louis. A couple of years ago he was transferred to Rome, where he has been head of the Apostolic Signatura, which is the Vatican's highest court.

Cardinal-Designate Wuerl is the Archbishop of Washington, D.C.

This is wonderful news and I released the following statement Wednesday congratulating them:

"On behalf of the Archdiocese of Boston, I am pleased to extend my congratulations and prayerful best wishes to Archbishops Donald W. Wuerl and Raymond L. Burke on being named to the College of Cardinals by Pope Benedict XVI. Our Holy Father has chosen these men to assist him in the important task of guiding the Universal Church. Both of them bring a deep and abiding love for Christ and His people to their new roles.

Cardinal-designate Wuerl and Cardinal-designate Burke have distinguished themselves as teachers of the faith and untiring servants of the Church. As our Holy Father calls them to the College of Cardinals, I pledge my prayerful support, and I ask the people of the Archdiocese of Boston to pray for these fine men, these great examples of priestly charity, as they assume their responsibilities as Cardinals in the service of our Holy Father and the Universal Church."

Saturday morning I had breakfast with the commandant of the Coast Guard, Admiral Robert Papp and his wife, Linda. He and his wife were in Boston for a retirement party for Msgr. Bill Cuddy. Msgr. Cuddy is returning to the diocese after many years of service in the Coast Guard, where he finished his career as chief chaplain. There was a festive gathering at Faneuil Hall to mark the occasion of his retirement ... They were very appreciative of the extraordinary ministry that Msgr. Cuddy has given to the Coast Guard.

I went down to Needham for a confirmation at St. Joseph Parish there. There was a wonderful class of 100 youngsters. Among those being confirmed was the late-Father Dan Kennedy's niece. His father, Daniel Kennedy, Sr., was the sponsor. Father Paul Sullivan, as administrator, has done a wonderful job there. Also present at the Mass was their newly-appointed pastor Father David Michael. So, I told the parishioners they were getting a sneak preview of their new pastor!

Sunday (10/17) I went to St. Mary of the Assumption in Lawrence for the 20th anniversary of La Voz Catolica, a Spanish-language Catholic radio station which was founded by Benny Espaillat and Maria Collado. Father Jorge Reyes, the pastor at St. Mary's, is the spiritual director. ...We had, as always, huge crowds, and many young families. Father Jorge and the Augustinians are doing an extraordinary job ministering to the Hispanics of Lawrence.

On Tuesday (10/19) I went to Brooklyn, New York, where I gave the keynote address at a convocation of priests and deacons of the Diocese of Brooklyn. ...Bishop DiMarzio had asked me to give the keynote and I began by saying it was the fourth time I had been invited to address people in Brooklyn, but the first time they've asked me to speak in English! It was a wonderful event, and it was the first time they had a convocation bringing the priests and the deacons together. I think it was very well-received by all.