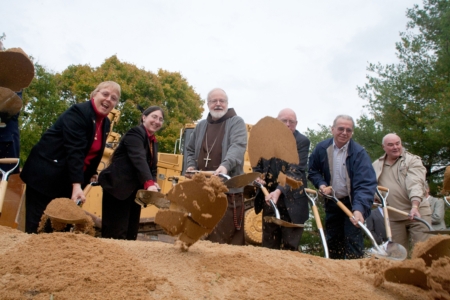 BILLERICA -- A dozen silver-colored shovels, embedded in a mound of sand, marked the Oct. 20 start of construction of an affordable senior housing complex on land adjacent to a Billerica parish.

On Oct. 20, the Archdiocese of Boston's Planning Office for Urban Affairs hosted a groundbreaking for Rose Hill Manor, a 41-unit affordable senior-citizen housing development that will be built on land adjacent to St. Therese of Lisieux Parish.

Construction was slated to begin the week of Oct. 25, and the project is expected to be completed in the fall of 2011.

As part of his remarks, Cardinal Seán P. O'Malley read a summary of a statement made by the Massachusetts' Catholic bishops to encourage state voters to prevent the repeal of the Affordable Housing Law, also known as the Chapter 40B zoning law, in the upcoming state elections Nov. 2.

"As Catholics, we believe that a home is central to a person's dignity," the statement said. "Pope John Paul II wrote that, 'the lack of housing, an extremely serious problem in itself, should be seen as a sign of a whole series of shortcomings: economic, social and cultural.'"

"Every community needs a mix of housing in order to be healthy, vibrant and inclusive," the statement continued. "Repealing Chapter 40B would result in the loss of a valuable tool that has prompted many cities and towns to build homes for those otherwise unable to secure adequate housing."

A referendum question is on the state ballot this year to ask voters whether they want to retain the 41-year-old law, which allows developers of affordable housing to sidestep certain municipal zoning requirements in towns where less than 10 percent of housing is considered affordable.

Development of Rose Hill Manor was permitted through the Chapter 40B law.

In addition to 41 units of affordable housing for senior citizens, Rose Hill Manor will consist of a community room and kitchen facilities.

The complex will be located constructed on land formerly owned by St. Therese's Parish, close to Route 3A and near the Billerica Mall. The parish sold the land to the archdiocese's Planning Office to build the complex.

"When you get familiar with the need as it exists in the town, we say, 'Wait a minute, we have land and we can serve the mission of the Church,'" said St. Therese pastor Father Eugene Tully. "One thing led to another."

Besides selling the land to the Planning Office, the parish will raise additional funds to provide other residential amenities for the Manor.

"It's our part. It may be a little part, but it's our part in addressing the problem," he said. "It feels very compatible to invest in this kind of a venture."

The development also received $5.5 million in federal funding from the Department of Housing and Urban Development's Section 202 program, which awards grants to developers to construct housing for low-income seniors. Additionally, over $2.5 million in funding was awarded by the state and the town of Billerica.

Lisa Alberghini, president of the archdiocese's Planning Office for Urban Affairs, said her office will start to compile a waiting list of potential residents for Rose Hill Manor.

"There's a great deal of need among senior citizens," she said.